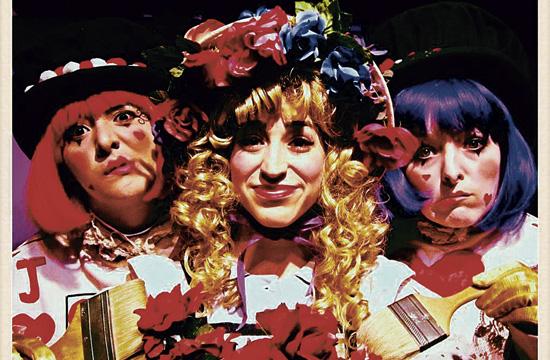 Santa Monica Playhouse has announced the return of the original Rudie-DeCarlo Family Theatre musical comedy “Alice and the Wonderful Tea Party” after its 2013 limited engagement.

The production, extended through February after its sell-out holiday run, follows a grown-up Alice who goes back through the looking glass to visit the wonderful Wonderland characters of her youth.

Join Alice as she takes a pun-derful return trip to the fantasy land of her childhood to visit her old friends the Queen of Hearts, Tweedle-Dum and Tweedle-Dee, the White Queen and a host of zany characters intent on musical madness and merriment. Will she prevail or are the Cards stacked against her? Will the Queen suffer a heart attack? Will the surprise tea party come off with civili-TEA or hostili-TEA?

Written and directed by the award-winning creative team of Chris DeCarlo and Evelyn Rudie, the Playhouse’s Alice, based on everybody’s favorite Wonderland tales, has performed to great acclaim all over the world, from Santa Monica to England to Japan and back again, and was the centerpiece of Kulov’s Tea Festival in Venice, CA, Valentine’s Day 2009.

Hearty concept and gorgeous costumes are by award-winning designer Ashley Hayes, inspired by designs from the late Cheryl Jennings.

In the past 100 plus years, Lewis Carroll’s immortal Alice stories have become the basis for innumerable dramatizations: Disney’s classic feature-length cartoon; an avant-garde Broadway version starring Meryl Streep; the Jefferson Airplane song “The White Rabbit”; the original 1933 movie version starring W.C. Fields as the Mad Hatter and Cary Grant as the White Knight; and eleven other Alice films in the past fifty years, one starring Sir Ralph Richardson, one with Peter Sellers, one with Scott Baio and the Tim Burton version with Johnny Depp, and of course the new “Once Upon A Time in Wonderland” television show.

Now, as the Playhouse steps into its second half-century of continuous education and entertainment in the community, Actors’ Repertory Theatre company presents its own tribute: the family theatre musical “Alice and the Wonderful Tea Party where Alice returns to Wonderland, to renew old acquaintances and re-awaken childhood dreams.

Admission is still only $10.50 for kids 12 and under, and $12.50 for adults. Festive Birthday and Tea Parties (of course) hosted by a costumed fairy tale character are offered with every performance.

For reservations and more information go to SantaMonicaPlayhouse.com or call the Playhouse Box Office at 310.394.9779 ext. 2. Reservations are necessary.

Santa Monica Playhouse, celebrating 53 years of continuous operation, is located at 1211 4th Street (between Wilshire and Arizona) in the heart of Downtown Santa Monica.