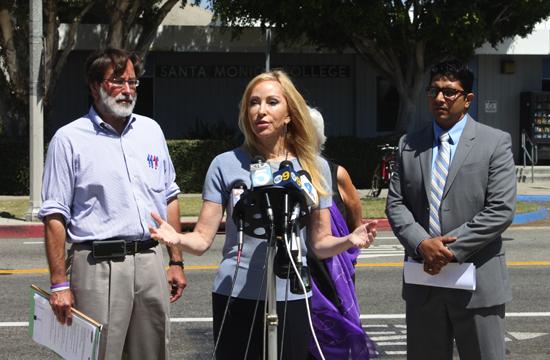 With the tragically rising frequency with which mass public shootings have occurred throughout recent years, including the tragic Santa Monica College shootings last June, the issue of gun responsibility has inevitably been put in the political spotlight as a response to such heinous crime.

On Wednesday, four notable speakers, all either survivors or family members of survivors of mass shootings, spoke at a press conference across the street from Santa Monica College.

Debra Fine, a survivor of the 2013 Santa Monica College shootings, shared her story and discussed her current endeavors regarding effective approaches to gun violence.

It has been just over a year since the devastating shootings at Santa Monica College, but Fine made sure to emphasize the fact that from her heart, she will always remember the victims and their families and loved ones.

As a survivor who was shot five times during the Santa Monica College shootings, Fine has courageously been able to channel her traumatic experience to become a victims advocate and work toward improvement in the current infrastructure of gun control in the United States.

The controversy behind gun responsibility lies in the fact that not only are there victims in front of the gun, there is also a victim of mental illness behind the gun.

“On the other end, I joined the board of the Maple [Counseling] Center,” Fine said. “[The Center] offers free or very low-cost treatment for people with mental illness.”

To further be able to detect any issues and eliminate their roots, Fine has become involved with the “I Have A Dream” Foundation, which works with at-risk youth at an early age.

Fine has also written a book titled “Wake Up Call: From Trauma to Triumph” to engage victims and help them lead productive lives post-tragedy.

Martinez, who has spoken through several media outlets to spread awareness about his son, is also taking wide measures to ensure that the topic of gun responsibility is addressed in the upcoming election’s ballots.

“We all have our part to end the gun violence crisis,” Martinez said. “Hold the politicians accountable […] Make them protect our children.”

One of his ultimate goals is to organize one million voters by the next election in support of stricter laws on gun safety.

Congressional candidate Kaleka, who traveled to California from Wisconsin to speak at the press conference, holds the issue of gun responsibility “near and dear to [his] heart” as a family member of a victim.

Kaleka elaborated on his own three-step proposition to initiating more serious regulations on gun responsibility, including the implementation of universal background checks on gun sales, tougher laws on gun trafficking, and accidental discharge insurance on every gun.

Kaleka highlighted the seriousness of the gun violence crisis by explaining why he flew out to Santa Monica to attend the conference.

“The West Coast is one of the most progressive areas in the nation,” Kaleka said. “But gun violence has struck [here as well].”

Martinez and Kaleka explained that they are not against weapons of defense in and of themselves – as they are both gun owners – but feel the absolute essentiality of implementing stricter laws.

Though, according to Kaleka, about “80 percent of the nation believes in safe, common-sense solutions” regarding gun laws, zero significant measures have been passed in Washington. The purpose of this press conference was to create discussion through the testimonies and announcements of mass shooting survivors from various national shootings.

Earlier this year on the one-year anniversary, Fine spoke about she had been heading home from a singing lesson in Santa Monica on June 7, 2013. Taking an alternate route to get home, she found herself caught in the crossfire of the SMC shooting spree, leaving her shot a total of five times. As she drove along, she saw a man dressed in black, holding an automatic rifle.

“He motioned the girl in front of me who was in a car, to pull over, and she did,” Fine recalled. “Then, he pointed the gun at her and she looked very frightened.”

Fine stepped on the gas of her car, yelling at the shooter to stop.

He raised his rifle and fired at her, with the first bullet hitting her in her right shoulder, and additional shots hitting her four times on her left side. The shooting spree claimed the lives of five people, including the gunman, and wounded several others.

For more information on Debra Fine and the Fineline Foundation, visit finelinefoundation.org and DebraFine.tv.