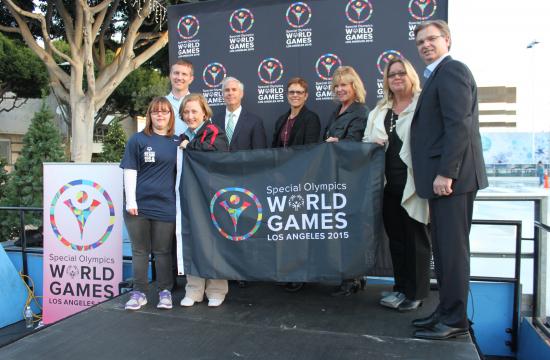 When the 2015 Special Olympics World Games come to Los Angeles in July, the city of Santa Monica hopes to create memories of a lifetime for about 100 lucky athletes in the lead-up to the Games as part of a Home Town program.

A press conference was held Thursday afternoon in front of the ICE at Santa Monica skating rink at 5th and Arizona where it was announced the city of Santa Monica had officially been selected to participate in the Special Olympics World Games Host Town program from July 21 – 24, 2015.

Before the Special Olympics World Games begin on July 25, 2015, more than 7,000 athletes from 177 countries will be welcomed to Southern California through the Host Town program.

As many as 100 communities from San Luis Obispo to San Diego will have the honor of being selected as an official Host Town.

Patrick McClenahan, president and chief executive officer of LA2015, the Games Organizing Committee, said its organization was thrilled to see so many communities eager to participate in this integral component of the World Games.

“The Host Town program will not only create lasting memories for these athletes and coaches from around the world, but leave a lasting legacy for the communities who are opening their doors, hearts and minds to host these inspiring athletes,” McClenahan said.

As a Host Town, Santa Monica will showcase many of the city’s must-do activities including: a visit to the Annenberg Community Beach House, the 3rd Street Promenade, Montana Avenue, Main Street, solar-powered Pacific Wheel Ferris wheel, the Santa Monica Pier, the Original Muscle Beach, Santa Monica Boardwalk, and, of course, take in a Southern California sunset from Palisades Park.

Misti Kerns, President and CEO of the Santa Monica Convention and Visitors Bureau, said Santa Monica’s Host Town athletes would receive a warm welcome from residents and visitors to the community and as the city’s hosted guests, would surely enjoy visiting and training for their sport in Santa Monica’s great seaside destination.

“Their trip will be punctuated with playtime on the beach, shopping in uniquely Santa Monica stores and enjoying the dining delights of many local hotspots,” Kerns said.

LA2015 is actively identifying potential Host Town candidates to be considered for the program. Communities are evaluated on the availability of lodging accommodations, sports practice facilities and recreation/entertainment offerings for the athletes, among other criteria.

Host Towns are also responsible for planning activities for the athletes to introduce them to the community and help spread the word about the Games.