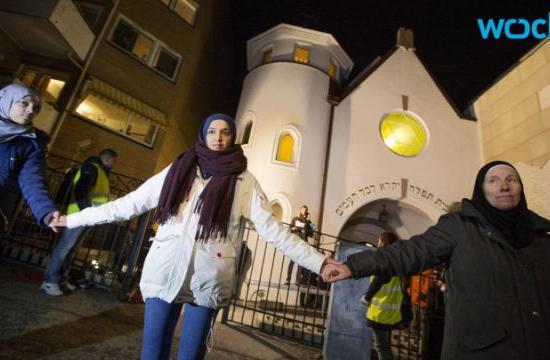 “Chanting ‘No to anti-Semitism, no to Islamophobia,’ Norway’s Muslims formed what they called a ring of peace a week after Omar Abdel Hamid El-Hussein, a Danish-born son of Palestinian immigrants, killed two people at a synagogue and an event promoting free speech in Copenhagen last weekend,” the New York Times published on Feb. 21.

If Yousef Bittar had moved from Saudi Arabia to Norway instead of moving to the United States in 2001, he would have been one of the Muslims defending the synagogue. Bittar was born in 1984 at the Dar Al Shifaa (House of Healing) Hospital in Damascus, Syria. The oldest of three children born to parents who were both doctors, he grew up in Damascus and Riyadh, Saudi Arabia. Bittar came to the U.S. as a student in 2001.

Now a resident of Santa Monica, this is his story. And because history pays attention to each of us, whether or not we are interested in it, it is also a way into thinking about the large geopolitical problems of our own time.

“As a child in Damascus I often saw my mother, when she was not going to her work as a doctor, wearing slacks. Women weren’t required to wear the hijab (the traditional Muslim women’s headscarf) but my mom chose to. Damascus looked then very much like a contemporary western city,” Bittar said.

“There were freedoms in many areas of life but none in political life. Assad was the President but he acted like a dictator. People were afraid to criticize Assad.

“As a child I made a joke about him in school and the joke was reported to the Principal who said that I needed to be punished. She warned that the next day the soles of my feet would be beaten with a cane in front of everybody so that everyone could learn a lesson from what I had done. I came to school the next day wearing three pairs of socks. But the beating never took place and I never knew why I was saved. What I did learn is that it was a great life in Syria as long as you stay out of politics.

“I played soccer on the streets with my friends. Our school gave us a good education in the sciences, math, language. We all studied English. My parents’ generation spoke French.

“Damascus was a predominately Muslim city and we could hear the Izan (the call to prayer) all over the city. My father would take us to the Mosque on Fridays. Sometimes my mother would come. Sometimes she would choose to pray at home.

“When I was nine my mom got a new job in Saudi Arabia. When she got to Riyadh she had a terrible experience. One she completely didn’t expect. She was walking down the street wearing her regular work clothes and the official religious police stopped her. They had big beards and wore long white robes. They traveled in GMC cars with blacked out windows. They took her to a shopping mall and made her buy an abaya (a cloth that covers the hair and the entire body) and told her she had to wear it at all times.”

It was a story that upset Bittar.

However, it was in Saudi Arabia that he got a chance to go to International School. Bittar was 14. He said, “The school was taught entirely in English and one of my teachers was from Los Angeles and I really liked her class.”

In June of 2001 Bittar came to the United States to study. His father had come with him to help him get settled in Chicago.

“My parents were both doctors and my uncles were both doctors and my father wanted me to be a doctor. It was hard,” said Bittar. “I was 17 and I had come from a close family and from the culture of Saudi Arabia to the United States and it was really culture shock. Nobody cared what I did. No one was watching. Not my family and not my neighbors. At the same time I felt like I had escaped and I felt like I could be happy.

“I did really well in school and I made a lot of friends in college and with my neighbors. My neighbors took me to church with them. I am Muslim but I wanted to learn about their religion and customs. I worked at the Subway sandwich shop and made friends with the other kids who worked there.

“Then 9/11 happened and no one would talk to me anymore. I so remember seeing three teenagers standing on the sidewalk and waving a big American flag. People going by in their cars were honking in support of them. I asked if I could join them and they said, ‘yes.’ We were having a great time talking and waving at people as they went by and honked at us. Then one of them asked, ‘where are you from?’ When I said I was from Saudi Arabia they took the flag away from me and I left.

“My dad definitely wanted me to have the life I could only have if I came to the United States. He didn’t have the opportunity to come here though there was a part of him that wanted that very much. So he made it possible for me to leave home, to live far away from my family and to make my future in the United States.

“Amazingly I was learning that it was okay to be different. That this is really a melting pot of people from all over the world and I began to feel if this person can be accepted so can I.

“Here in the U.S. the question American parents ask their children is, ‘what do you want to be?’ In my family that wasn’t the case. I got upset and left my studies for a while. I finally graduated. My degree was in biology and chemistry, as my family wished.

“It was 2008. I knew I didn’t want to be a doctor. It was a bad economy then and it took me months to find a job. My first job was at a bank in Mount Prospect in Chicago. I loved working there. I think I grew up professionally in the bank.

“In 2013 a really good branch of the bank I worked for offered me a job in Santa Monica. I didn’t know what it would be like to live in Santa Monica but I took the job.

“Moving was much tougher than I had realized. You have to make new friends, leave old friends, get acquainted with a new city, learn a new job. 2013 was a rough year.

“By 2014 I was having a good year professionally and I had amazing experiences meetings all kinds of people at work and in Santa Monica. Now it’s 2015 and all I can say is that you never know the future.”

Yousef Bittar is a success story, both in his professional and in his personal life. The kind of story we want for all our children. The details are different, but doesn’t it sound like an emotionally familiar journey to being an adult?

It’s not that there haven’t been hard things in Bittar’s life. Hard for him is the violence done in the name of Islam. Bittar is angry and firm when he states, “terrorists have no place in Islam. It is not Islam who is the executioner; it is the man who is doing the terrible act who is the murderer.

Bittar said, “Hope comes because the culture in the Middle East has started changing in the last 15 years. Globalization and social media and websites and the Internet have transformed the way people act and think.

“Then I see the violence of these terrorists who came out of seemingly nowhere and have set the Middle East back centuries. Any person can figure out what these people are doing is wrong.

What matters to Yousef Bittar is what matters to all of us. Those same values motivated the more than 1,000 Muslims in Norway who formed a “Ring of Peace” around a Jewish synagogue in Oslo on Saturday, Feb. 21.

Those same values motivated the making of the 2013 documentary film, “Honor Diaries,” telling the stories of nine human rights activists who expose the cruel horror of “honor killings.” — https://www.youtube.com/user/honordiaries

In Paris millions of people demonstrated in support of the values of liberty and equality and as a protest against the murders at the offices of Charlie Hebdo and the kosher market in Paris. — http://www.theguardian.com/world/gallery/2015/jan/08/demonstrations-of-solidarity-after-charlie-hebdo-attacks-in-pictures

The terrorists in Paris had shouted “Allahu Akbar” (Arabic for “God is Great”) as they were murdering people. In Yousef Bittar’s words, “They try to justify the evil inside them. The easiest way for them to justify their evil deeds is to say it is in the name of religion.”

There are over 1.5 billion Muslims in the world. If Islam really were a terrorist religion we wouldn’t have much of a chance. Mobs and thugs have hijacked the name of Islam.

For protection from terrorists we look to our government and our military men and women. For our future and our children’s future we must find the way to a world without terrorists.