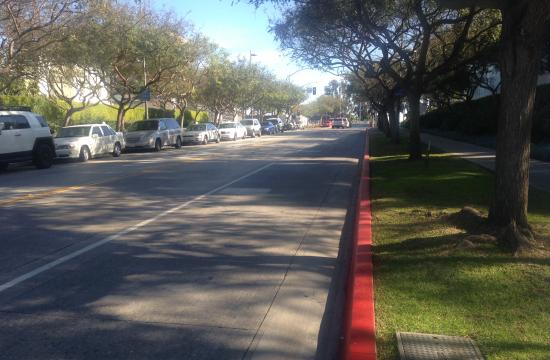 Less than two weeks after The Mirror reported on a handful of vehicles being towed daily at 2 pm thanks to a change in parking enforcement signage, the City has removed all 12 parking meters along the south side of Olympic Drive between Main and Fourth streets and painted the curb red to signify no parking 24/7.

The Mirror had previously observed people on multiple days simply not reading the signs and getting their vehicles towed despite clearly marked “No Stopping, 2 P.M. to 5 A.M.” signs at each parking space.

The City had also attached a small label on the parking meters on the stretch that read: “Notice: Meter Day/Hours have changed. Please see posted signs for changes.”

Santa Monica Acting Chief Administrative Officer Salvador Valles, of the City’s Planning Department, said the tow zone was introduced on Olympic Drive in October 2014 to assist with mitigating traffic congestion in the afternoon and evening hours by providing one more travel lane in lieu of parking.

“This is a common practice in cities including Los Angeles to allow for parking during non-peak traffic periods,” Valles said. “Towing is necessary when vehicles are parked in what becomes a travel lane to ensure that traffic is circulating. Maintaining parking spaces for part of the day was intended to provide for some continued parking in the morning hours.”

Valles said all meters along the south side of Olympic between Main and Fourth streets were removed on Friday, Feb. 27, citing “recent feedback.”

“This will hopefully eliminate confusion,” Valles said. “Parking will no longer be allowed at any time and instead there will be two active east bound travel lanes 24 hours a day.”

When asked about the removal of the parking meters, Mayor Kevin McKeown said, “We’ve all observed that the Olympic connection west to Ocean has turned out to be a much-needed alternate route for many people, relieving stress on other streets, and became a busy street the day it opened. Adjusting lane options for optimized traffic flow is something our traffic planners have to do all the time as driving patterns shift.”