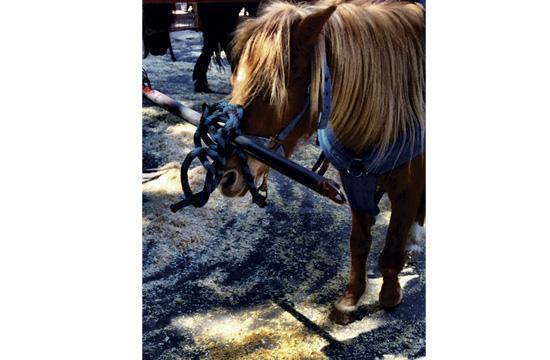 I am a resident of Santa Monica who has been involved in numerous grassroots animal welfare investigations over the past 10 years.

I am writing today to express my sincere appreciation for the City Council’s decision to open the bidding process to non-animal vendors, ending the pony ride’s decade-long monopoly on the entrance to Santa Monica’s Main Street Farmers Market. This is a strong step forward, but we need to go one step further: to make it illegal to shackle ponies for hours on end.

Pony rides may look cute, but they are inherently cruel when ponies are lashed to metal bars and forced to march for hours in the Southern California heat. With their heads or necks bound to a pole, they listlessly march in tiny circles, shoeless on the hard concrete — no boots, no cushions — while subjected to the constant clamor and motion of the Farmer’s Market. Motorcycles roar past, and a band blares next to the ponies’ ears. The animals in the crowded petting zoo endure the same misery.

The excitement of the Farmer’s Market is a joy for humans, but a torment for the animals subjected to its color, noise, and movement. That’s one of many reasons why animal welfare organizations like the ASPCA have gone on record opposing carousel pony rides as inhumane.

And it’s why animal vendors are desperate to silence those who call attention to cruelty. The leader of the Main Street Market protests, Marcy Winograd, as well as local resident Danielle Charney and 20 unnamed defendants have been named in a SLAPP suit. SLAPP stands for Strategic Lawsuit Against Public Participation, a meritless suit filed to harass and intimidate whistleblowers and to discourage those who would speak out against unethical and inhumane practices. It’s an unconscionable attempt to stifle our First Amendment rights, to shrink a robust political debate into a narrow, litigious dispute behind courtroom doors. The Court has dismissed the claims against Ms. Charney, but the harassment of other animal welfare activists continues.

Animal exploitation has no place in our community. We should encourage the human-animal bond in a safe, healthy environment where the welfare of both children and animals is paramount. To that end, there are many responsible and accredited sanctuaries within an hour of Santa Monica: The Gentle Barn, Farm Sanctuary’s Animal Acres, and Wildlife Way Station are all wonderful places to learn about animals in a peaceful, natural, and humane setting.

It’s time to open the bidding process to local merchants, and ban the inhumane shackling of ponies.