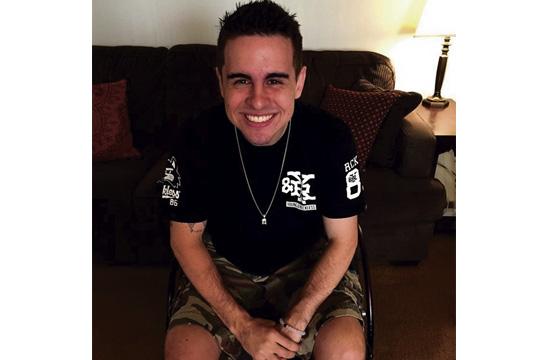 Cody Williams’ body tells his story better than anyone can. There’s the jagged spinal cord injury ribbon on his right bicep. Above that is a protruding Samoan warrior in a football helmet, wielding an axe. There’s the signature of his mother’s name, Stacy, and words like “Strength,” “No Days Off” and “What Doesn’t Kill Me Makes Me Stronger.”

The tattoos are how Williams remembers his life.

And at the bottom of it all, holding up this storied collage and peeking out from beneath his right shirt sleeve, is 9-11-09, the day he was instantly paralyzed at 16 years old.

Williams was a junior playing varsity football for Santa Monica High School in 2009 during the first game of the season. When he went after the quarterback and made the tackle, his facemask had hit the quarterback’s leg and he fell. The force of the collision had snapped his neck.

A spot on his left arm is reserved for the date he will walk again.

Until then, Williams, now 21 years old, is going after a new kind of wheels other than his wheelchair: a pickup truck. It’s one that he’ll be able to drive using hand controls that will allow him to push the gas and the brake.

He’s asking for donations through the GoFundMe fundraiser page, “Help Cody Drive.” Up for almost a month, the site’s page is almost halfway to his aim of $30,000.

“There’s buying the truck, about half of it, then fitting it with hand controls, a special seat that can come in and out of the truck, and then a crane that’s in the bed of the truck,” Williams said, adding that there’s also the cost of driving school, which he was in the process of before his injury.

The idea came to him when he and his mother were at the annual Abilities Expo, an exposition for people with disabilities, on the first weekend in March at the L.A. Convention Center. When his cousin told him that he was trying to sell his silver 2011 Chevy Silverado, the one Williams had always admired, he realized his new goal of self-sufficiency.

His mother and he went back to the Expo the next day to test out all of the hand controls on the cars.

“Going to that Expo I saw a change,” she said. “He saw that there is a life to be lived, living in a wheel chair.”

Williams, who goes to physical therapy three times a week, often has to depend on his single mother, various family members or the unreliable access van to get across town to and from his home in Culver City. Since graduating on time from Santa Monica High in 2011, he’s begun taking night classes at Santa Monica College this year.

In a few years, “I want to be driving myself, living on my own, having a job and just living a normal life as much as possible,” Williams said. “That’s the goal: being as independent as possible and not letting this injury hold me back.”

After all, Williams has defied the odds. Most people with severe spinal cord injuries rarely survive a month or two after an accident. After paramedics rushed him to the Ronald Reagan UCLA Medical Center, it took nine hours for doctors to stabilize the front and back of Williams’ neck.

When he awoke from surgery, he was able to move his left arm.

The day that the doctors took out his breathing tube from a bad pneumonia post-operation, he was eating In-N-Out and drinking Jamba Juice. A week later and to his mother’s dismay, he had football on the TV in his hospital room.

Now with this new purpose of driving and attaining independence, he continues to push the limits of his wheelchair.

Williams said that the discipline, the hard work and the never-give up attitude, something that they demonstrate in the game and practices, has paved the way for his achievements post-injury.

“I’ve played football since I was eight – it teaches you a lot in life,” Williams said. “I still love the sport.”

As the Williams’ often say, football got Cody into this, but football is getting him out of it.

For more information on his GoFundMe fundraiser, visit gofundme.com/helpcodydrive.