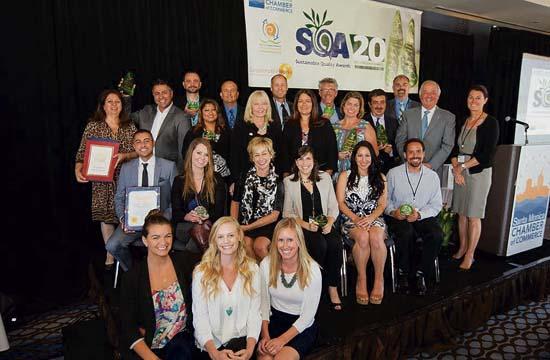 Santa Monica’s SQAs are the oldest and most recognized sustainable business awards in Southern California, according to event organizers.

A joint initiative of Santa Monica Chamber of Commerce, the City of Santa Monica, and Sustainable Works, the awards are a chance to reflect on the high level of innovation in the City, according to Santa Monica Mayor Kevin McKeown.

“It’s very important to acknowledge those people who are willing to join us on the cutting edge; to do things first; to help us prove what works; and develop best practices,” McKeown said.

Speaking at the event, Mayor McKeown announced plans for a new net-zero water, net-zero energy City office building for City staff, a move that no other City has done to date, according to the Mayor.

It all “makes good economic sense,” he said.

The awards are intended to educate and inspire local businesses to adopt sustainable practices and support Santa Monica as a sustainable community, organizers said, with more than 175 businesses honored since the program launched in 1995.

“We congratulate the past and current winners on their exemplary leadership,” said Shannon Parry, Deputy Sustainability Officer for the Office of Sustainability and the Environment for the City of Santa Monica.

Sustainability highlights the web of life according to Parry, things that are often seen as individual and discreet but are actually part of a complex whole system, including the environment, economic vitality and social justice.

Honoring businesses that have made significant achievements in the areas of sustainable economic development, social responsibility, and stewardship of the natural environment, this year’s awards saw Capital Intelligence Associates, Locanda del Lago, and Shore Hotel, take the top prize.

The SQA Grand Prize is given to businesses that make significant achievements in the categories of sustainable economic development, social responsibility and stewardship of the environment, according to event organizers.

“The consciousness in Santa Monica is like no other,” said Santa Monica Chamber of Commerce President Laurel Rosen. “People have a certain level of understanding of what they have to do to live in this City.”

The spirit of working together and acknowledging that sustainability is everyone’s responsibility is making Santa Monica a national role model, Rosen added.

“We hope to inspire other businesses to adopt their own sustainable practices,” Parry said, explaining that the educational component of the annual awards is also important.

For more details on Santa Monica’s SQAs, head to www.smsqa.com.