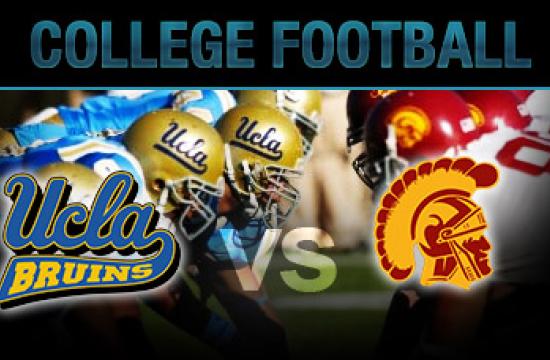 The UCLA-USC football game will be played today at the Los Angeles Memorial Coliseum, with the winner advancing to next Saturday’s Pac-12 Football Championship Game.

A South Division championship and a berth in the conference championship game seemed unlikely for the Trojans after their 17-12 loss to Washington on Oct. 8 dropped them to 1-2 in conference play and a tie for fourth in the six- team division, 1 1/2 games behind division-leading Utah.

Coach Steve Sarkisian was placed on indefinite leave on Oct. 11 amid rumors of continuing troubles with alcohol and fired a day later, with offensive coordinator Clay Helton appointed as interim coach.

The Trojans also won each of their next three conference games, allowing them to remain in contention for a division championship even with last Saturday’s 48-28 loss at Oregon.

“When we started this thing out six weeks ago we said what an unbelievable story it would be to win a Pac-12 South championship and here six weeks later we’re on the cusp of having the opportunity to do that,” Helton told reporters on a conference call this week.

“It would be a neat story for a bunch of great seniors and resilient seniors to walk away Pac-12 South champions.”

Since the Pac-12 Conference went to the two-division format in 2011 with the additions of Colorado and Utah to the conference, USC has never won a South Division championship.

The Trojans finished first in the standings in 2011, but were ineligible for the division championship because of a penalty by the NCAA for violating various rules.

Both teams are 8-3, 5-3 in conference play. The Bruins are ranked 22nd in The Associated Press poll, while USC is not among the top 25 officially ranked. The Trojans received eight points in the voting for the most recent poll, which was released Sunday, putting them 32nd.

Various oddsmakers have made USC a 3-point favorite. ESPN’s Football Power Index gives the Trojans a 65.6 percent chance of winning.

The Bruins are seeking their first four-game winning streak over the Trojans since it won eight straight from 1991-98.

The winning team will be awarded the Victory Bell, a 295-pound bell originally hung atop a Southern Pacific freight locomotive.

The bell was given to the UCLA Alumni Association in 1939. In 1941, it was taken by a group of USC students.

A year later, the student body presidents of both schools signed an agreement providing that the winner of the game would keep possession for the next year, a tradition that has continued.

The temperature at the 12:30 p.m. kickoff will be 62 degrees, according to the National Weather Service.

The game marks the conclusion of Tackle Hunger, a weeklong joint effort by UCLA and USC to benefit the LA Regional Foodbank.

A public service message asking fans to make a $10 donation to the LA Regional Food Bank by texting  “GoUCLA” or “GoUSC” to 41444 on their smart phone will be played on the Coliseum’s video board.