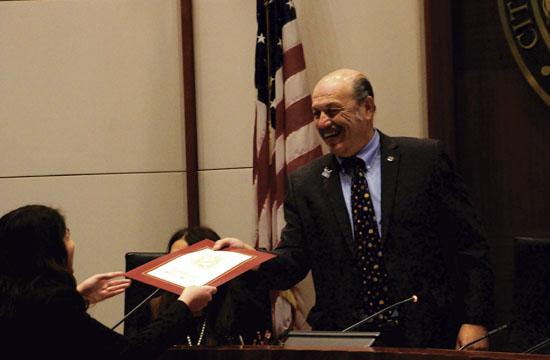 Proud 30-year resident Tony Vazquez was installed as Santa Monica Mayor and Councilmember Ted Winterer as Mayor Pro Tempore at Tuesday night’s City Council meeting, positions which they will serve in for the next year.

As part of the Dec. 9, 2014 City Council meeting, the Council voted that night that Kevin McKeown would only be elected Mayor for one year instead of a normal two-year term.

The reason? Slow growth council members Tony Vazquez and Ted Winterer are both up for election in November 2016 – going into an election with a ballot designation of Mayor and Mayor Pro Tempore is seen as an advantage, even though the titles are largely ceremonial.

At the Dec. 9, 2014 meeting, Councilman Kevin McKeown was elected Mayor of Santa Monica by his fellow council members for a one-year term, with Councilman Tony Vazquez elected Mayor Pro Tempore.

As part of that meeting, it was voted that McKeown would step down as Mayor after 12 months in anticipation of the 2016 election year with Vazquez to be installed as Mayor and councilman Winterer as Mayor Pro Tempore.

Councilwoman Sue Himmelrich, part of the four slow growth members on City Council, made the motion on Dec. 9, 2014 for her three slow growth counterparts to serve split terms as Mayor and Mayor Pro Tempore.

First elected to Santa Monica City Council in 1990, Vazquez served for four years and was elected again in 2012. He served as Mayor Pro Tempore this past year.

Vazquez and his wife, Maria, have two grown children who are both graduates of the Santa Monica-Malibu Unified School District.

Vazquez has more than 20 years of business and government experience involving strategic and long-term planning, business development and municipal and legislative advocacy.

For his current term, his main area of focus will be focusing on responsible growth and development, fiscal responsibility, public safety, homelessness, the future of Santa Monica Airport, open and responsive government, and education.

Mayor Pro Tempore Ted Winterer was elected to the Santa Monica City Council in November of 2012. He previously served the City as a Planning Commissioner and Recreation and Parks Commissioner.

He’s also been involved in the Santa Monica community as the president of the Ocean Park Association, a steering committee member of Community for Excellent Public Schools (CEPS), and a member of SMMUSD’s Bond Committee.

Winterer graduated from Dartmouth College in 1979 with a BA in English Literature and Film Studies. He spent many years as a development and production executive in the motion picture industry and is currently works in residential real estate sales. Winterer lives in Santa Monica’s Ocean Park neighborhood with his wife and two kids.