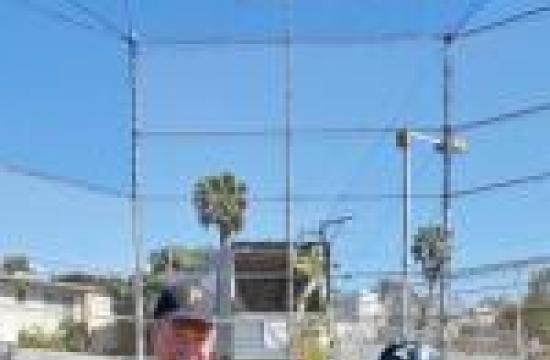 In a thrilling final round of the first annual Santa Monica Pony Rosti home run derby yesterday, 12-year-old Ben Lee rose to the challenge and blasted his way into a years worth of free pizza!

“I saw it going and I knew it was goner. It was probably one of the deepest balls go that I’ve seen here,” said Pat Armstrong, home run derby pitcher. In the final round, the John Adams middle school student put it away with one home run after another. 12 year old Jaden Labrie, also of John Adams middle school, was in the finals with Ben and in the previous round hit the “golden ball” out of the park for the two free Los Angeles Dodgers box seats.

Jaden went toe-to-toe with Ben throughout the series, proving he was also a contender to be champion. “It was anyone’s game,” said Wes Terry, Santa Monica Pony, Home Run Derby coordinator.

“The bar was set real high early on, the talent out here is tremendous. The fans really got a show. All these kids were hitting bombs in each round, it was truly exciting to watch and the crowd was really into it.”

As the winner of the first annual Santa Monica Pony Home Run Derby, Ben Lee received a huge trophy and free pizza for a year, courtesy of the derby sponsor, Rosti Tuscan Kitchen in Santa Monica.

“We couldn’t have had a better sponsor. Two great american past times, pizza and baseball. Another great way to get the community together for a good time and supporting the league,” said Justin Satinover, Santa Monica Pony sponsorship chair.

Santa Monica Pony Baseball is a non-profit organization that was created to provide all players between the ages of 4-14 the opportunity to participate in baseball. The organization aims to “Protect Our Nation’s Youth” as they grow into young men and women and become leaders of tomorrow. Santa Monica Pony Baseball is a community based program for everyone in the family to enjoy.