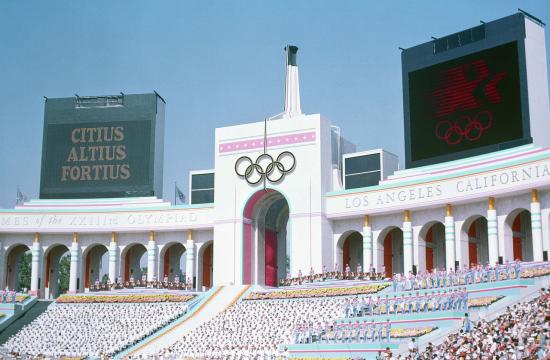 The Olympic cauldron blazing above the Coliseum gave it away: Los Angeles will host a third Olympics — in 2028.

The news on Wednesday after a vote by the International Olympic Committee in Lima, Peru, was anticlimactic. Competing with Paris to win the 2024 Summer Games, Los Angeles was awarded 2028 while Paris will play host in 2024.

Other than an LA 2028 sign posted at the Coliseum, there were no festivities at the site of the opening ceremonies in 1932 and 1984. A homeless man pushed a shopping cart past the black iron gates and a few people strolled by on their way to visit museums in Exposition Park south of downtown.

For the second straight night Wednesday, some of the city’s landmarks and buildings were to light up in support of LA 2028, including Capitol Records in Hollywood, City Hall, Griffith Observatory, Hollywood Bowl, the Ferris wheel on Santa Monica Pier, the Rose Bowl in Pasadena, UCLA, which will host the athletes’ village, and the University of Southern California, which will host the media.

IOC President Thomas Bach is scheduled to visit Los Angeles on Sunday and Monday, along with senior IOC leaders.

Bach will join Mayor Eric Garcetti and bid chairman Casey Wasserman, along with an IOC delegation, at the Coliseum for the NFL game between the Washington Redskins and LA Rams. Bach will re-light the Olympic cauldron.

Bach and Garcetti will also attend the Emmy Awards on Sunday at downtown’s Microsoft Theater, the proposed venue for weightlifting in 2028.

In ceding the 2024 games to Paris, the Los Angeles bid committee agreed to millions of dollars of financial sweeteners for accepting the later date.

“Something that’s really awesome about the Olympics is no matter what year it is, no matter what city that it’s in, people are always excited about it because it doesn’t happen every year,” 2008 Olympic all-around gymnastics champion Nastia Liukin said. “The momentum will build toward LA 2028.”

Garcetti and other city officials have said their proposal can stay within budget by relying on the region’s many existing stadiums and arenas, including the Los Angeles Memorial Coliseum and Staples Center.

The bulk of the revenue for the LA Games is expected to come from ticket sales and corporate sponsorships.

Part of the deal includes creation of a reserve fund to cover any cost overruns, with the city kicking in $270 million. The state is expected to commit a similar amount.

The extra four years pose challenges for Los Angeles, from maintaining public interest to rewriting deals for stadiums, arenas and housing that were all tied to 2024.

Naber said that just as athletes cannot sustain what he called “Olympic-caliber enthusiasm” throughout the quadrennial, the bid committee will need to rethink its approach as well in a city where the distractions include the beach, mountains, desert, pro and college sports and Hollywood.

“But the fact that the IOC has advanced us money and asked us to promote Olympic sports in our local youth means that all of Southern California is going to be embracing the amateur sports ethic,” he said, “and that’s nothing but good for LA. It’s going to benefit our city for the full 11 years.”

Naber noted that the athletes’ village came about at the 1932 Games and in 1984 Los Angeles used sponsorships to make the games affordable and recruited a huge volunteer corps.

In 2028, he said, the use of technology will allow Olympic stories to be told to as many people as possible as quickly as possible.

“The world mecca of delivering a message and telling a story, that’s here,” he said, noting Hollywood’s involvement in the city’s bid.

Gold medal-winning gymnast Jordyn Wieber said the sports and fitness culture in Los Angeles makes it a perfect fit to host another games.