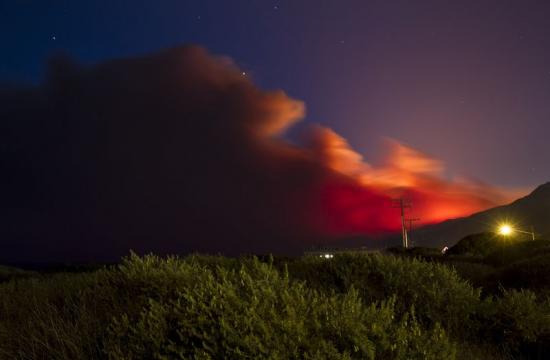 As disastrous and deadly wildfires raged through once-lovely residential areas in the Wine Country and other Northern California points this fall, there were signs that the aftermath could play out similarly to a scene that began almost exactly 10 years earlier in Southern California.

Loud claims were heard this time that negligent maintenance of power lines and poles, together with insufficient brush cutting near them by Pacific Gas & Electric Co., were among reasons for the fast spread of those flames, which consumed well over 8,000 homes and buildings and took several dozen lives.

If that’s ever proven, one state senator demanded, PG&E should be broken up. Said Democrat Jerry Hill of San Mateo, a persistent thorn in utilities’ sides, “If we find that in this particular case – and we don’t know the cause yet – then frankly I don’t think PG&E should do business in California any more,” he said. “They’ve crossed the line too many times,” he added, referring to the company’s federal negligence conviction in the multi-fatal 2010 San Bruno gas pipeline explosion. “They would need to be dissolved in some way, split.”

Suspicions against PG&E result in part from what happened in October 2007, when winds up to 100 mph whipped arcing power lines owned by San Diego Gas & Electric Co., eventually starting a small fire near Ramona, in eastern San Diego County. Known as the Witch Creek Fire, this blaze grew exponentially and reached the San Diego city limits. It combined with two other fires, and burned down whole neighborhoods. More than 1,125 residences were destroyed as at least 197,000 acres burned in some of California’s highest-priced neighborhoods.

Like this fall, evacuations were ordered over the almost three weeks those fires burned in cities like Oceanside and Encinitas, Del Mar Heights and Carmel Valley, Rancho Santa Fe and the heavily afflicted Rancho Bernardo. The evacuations eventually involved about half a million persons, still the largest ever in this state.

But nothing untoward happened to SDG&E afterward. In fact, the state Public Utilities Commission right now is evaluating a rate case that could have consumers pay 90 percent of the utility’s $379 million in fire-related costs. The PUC’s long history of favoring utilities over consumers suggests the company will get at least a good part of what it’s asking.

Like PG&E, the San Diego company is obliged to serve fire-prone areas, so it says having customers pay 90 percent of its costs is consistent with past PUC  rulings involving hazardous wastes and other problems.

If PG&E’s equipment is eventually found to be a proximate cause for this year’s hugely destructive fires, don’t bet on it being punished any more heavily than it was over San Bruno, even if there proves to be truth to allegations that PG&E has helped stall a PUC effort to map where power lines pose the greatest wildfire risks.

One newspaper’s review of documents from that mapping project showed utilities have repeatedly asked to slow down the effort, saying some proposed regulations would “add unnecessary costs to construction and maintenance projects in rural areas.”

“The sad part,” Hill told one reporter, “is the (maps) didn’t arrive before these fires…It’s an outrageous example of negligence by a regulatory agency.”

For sure, with knowledge from the Witch Creek Fire long in hand, there should have been no delays in mapping utility line danger points all around California and forcing power companies to mitigate them. But that didn’t happen, and the strict new regulations likely to follow completion of the maps do not yet exist.

Meanwhile, PG&E officials weren’t saying much about these issues, instead insisting they’ve focused on restoring power to the hundreds of thousands of residents who lost electricity and natural gas service during the Northern California firestorms.

The bottom line is that the PUC will most likely be exposed again as lax in its regulation of major utilities in this state. It’s probably too late in Gov. Jerry Brown’s administration to expect him to suddenly start pressuring the commission to change course. But the next governor, to be elected in just under one year, should push major reforms, possibly even press to make PUC members elected officials and not political appointees.