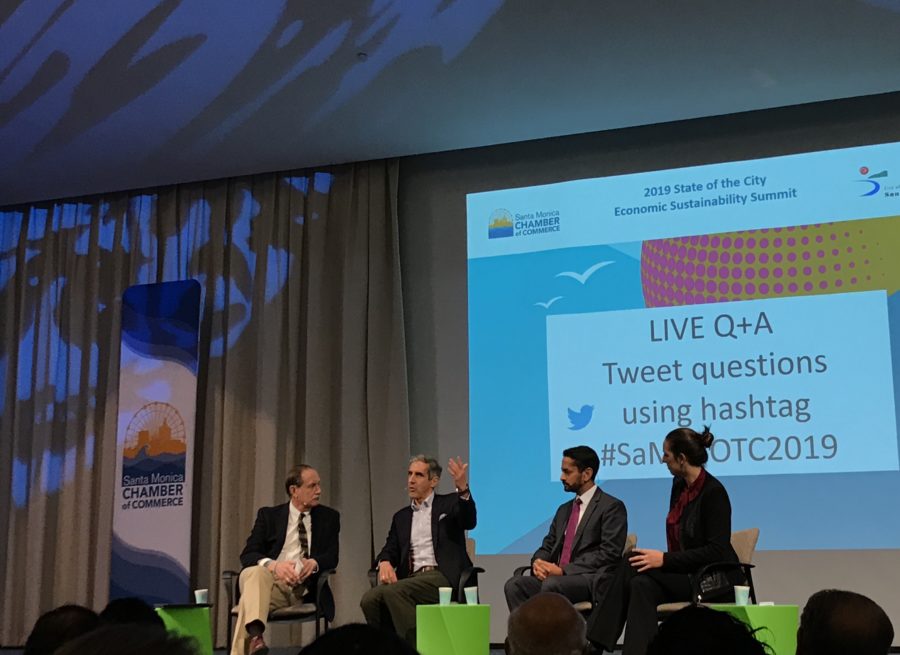 This past Wednesday, the Santa Monica Chamber of Commerce held its annual Economic Sustainability Summit, including a State of the City address by Mayor Gleam Davis.

Starting off her speech, Davis urged the need to maintain a “diverse and robust” local economy during the City’s process of rethinking its resource allocation, looking ahead at “the looming pension liability that threatens every city in California.”

According to a September 2018 post by City Manager Rick Cole, the total pension shortfall for Santa Monica is approximately $450 million dollars. While the city’s ten-year forecast does have plans for paying it off by the end of their ten-year forecast, it is a large number to contend with; hence the need for reforming Santa Monica’s resource allocation.

“We must transition from being a government mired in the old ways of doing things,” Davis said, “and evolve to become a customer-centered, agile and accessible twenty-first-century government.”

Bringing up a topic close to the hearts of many Santa Monica residents, Davis went over crime stats in the city. Last year, Part 1 crime in Santa Monica went up by 8.8 percent, leading to debates over the potential causes—with many pointing fingers at the Expo Line, Proposition 57 and the growing homeless population. Fortunately, the rising crime stats have come to a stop, for the time being.

“We began 2019 with a 12.5 percent dip in crime, and we are committed to maintaining this momentum,” Davis said.

Another large point of focus for the Mayor was climate change. While it is politically a controversial topic, Davis made it clear that there is no room for denial when it comes to planning the city’s future.

“Here in Santa Monica, the threat is to our very identity as a beach city. Without a dramatic decline in greenhouse gas emissions, two-thirds of Santa Monica’s beaches will disappear by 2100,” Davis said. “Beginning this month, through our membership in the Clean Power Alliance, our residents and businesses will have the opportunity to get 100 percent of their energy from non-nuclear renewable sources.”

Another central point of Davis’ speech was the way in which many Santa Monica residents acquire information and news, taking aim at social media platforms like Facebook and Twitter for housing inaccurate information.

“Not everything on Facebook, or Twitter or many websites is true, and much of what we see there is meant to appeal to our worst instincts,” Davis said. “It’s fine to have an opinion, but too often we enjoy the comfort of opinion without the discomfort of thought.”

Davis used this to segue into detailing plans to redesign the City of Santa Monica’s website in a way to bolster transparency and dialogue.

The Mayor went on to announce plans to make the entire Big Blue Bus fleet electric. While this move is in line with the City’s sustainability plans, it is also an attempt to decrease the use of personal cars.

“Our goal is not to take away anyone’s automobile, but when we drive, we need to admit that we are the traffic we hate so much,” Davis said. “Solving traffic will require that we make public transit a better alternative to the personal auto, and that we make our streets safer for other modes of transit such as walking.”

Other speakers at the summit included Misti Kerns of Santa Monica Travel and Tourism, who, when accepting the Economic Excellence Award, shared some of the economic benefits the City sees directly as a result of tourism.

“Over the last decade, our hotels have delivered nearly $440 million to the City’s general fund, with a record-breaking $66 million collected in 2018,” Kerns said. “Sales tax is estimated nearly $90 million over the last decade.” She also mentioned that homeowners saved $1,379 of property taxes as a result of tourism helping to pay for those City services.

According to Kerns, tourism in Santa Monica employs 13,345 people, work which she says cannot be outsourced.

Peterson, a former senior political scientist at The RAND Corporation, weighed in on changes the City may see in renewable energy, arguing that Santa Monica cannot make global emission changes on its own.

“What we did was partner with 32 cities and counties in the region…really build a new model for power delivery,” Peterson said in reference to the Clean Power Alliance. “That is how we have to lead going forward, partnering, leading and building that regional capacity in the face of national dysfunction.”

Looking to the future, Peterson said there is a lot of uncertainty in how technology, and the City’s economy with it, will develop. According to Peterson, change is certainly ongoing, but whether that is positive or not depends on much more.

Also focusing on the need to work more closely with the community was City Manager Rick Cole. Using the example of homelessness, Cole pointed out that even with more money, the government alone cannot solve such issues the way the community can.

“But you can put people to work in your businesses, you can volunteer in our community organizations, you can donate to the services that actually make a difference in people’s lives,” Cole said.