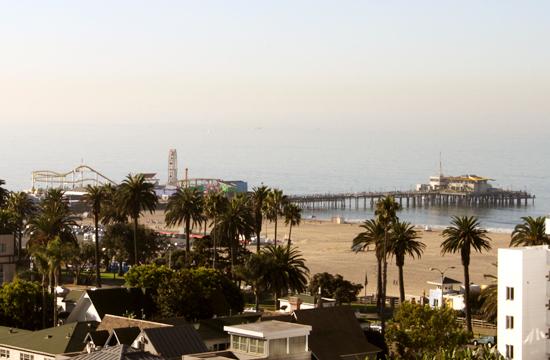 A huge oil spill in the Gulf and plastic waste in the oceans were in the news in 2010 along with more disturbing information about global warming. In Santa Monica, these events led to local actions and overall the city continued to live up to its reputation in 2010 as a place full of people who care about the environment.

State of the Bay

In January 2010, the “State of the Bay” conference at Loyola Marymount featured the Santa Monica Bay Restoration Commission’s Report Card (current Santa Monica Mayor Richard Bloom, a member of the Commission, was present at the conference). The report listed these accomplishments: wastewater treatment; a decrease in mass emissions and an increase in biodiversity; safer swimming at local beaches (in dry weather); better monitoring of bacteria and pathogens in the water; more habitat protection and restoration; and better control of trash. Mark Gold of Heal the Bay and Dean Kubani of Santa Monica’s Office of Sustainability and the Environment also spoke at the conference about the city’s actions to clean up the ocean water and to control urban runoff.

In February, Terry O’ Day, a former Planning Commissioner, was appointed to the City Council to fill the seat vacated by the death of Ken Genser. O’Day is the Executive Director of Environment Now and while on the Planning Commission, participated in deliberations regarding the Land Use and Circulation Element (LUCE) and the Expo Light Rail. With his appointment, the Council gained an environmental advocate among its members.

As opposed to recent years, Santa Monica’s urban forest was not as contentious an issue in 2010. The Urban Forest Task Force held a series of community meetings in April and May, where community members, in breakout groups for their areas, discussed preferences for trees and plans for planting and maintaining trees, with far less discord than back in 2008 when the City’s removal of trees in the downtown area sparked protests.

The city gained a mature olive tree which was transported from Porterville California to be planted on the rooftop dining deck of the almost-completed Santa Monica Place mall.

But to offset the gain, many ficus trees were removed from streets in the Sunset Park area this year due to a fungal infection called Nattrassia. “It pains me to lose a single ficus tree, because they are so valuable – they are environmental workhorses.” said Walt Warriner, Community Forester.

Some environmental menaces were the topic of proposed legislation and action. Enforcement of the ban on leaf blowers, enacted in the 1990s, was increased in October, when the Office of Sustainability and the Environment (OSE) took over the enforcement of updated restrictions, allowing OSE staff to issue administrative citations to leaf blower operators, landscaping companies, property owners and/or property managers.

After Julia Brownley’s AB 1998 banning plastic bags was defeated in the State Legislature, the Los Angeles County Board of Supervisors moved to enact a ban on plastic bags for unincorporated parts of the county on Nov. 16. Heal the Bay sponsored its fourth annual “A Day Without a Bag” on Dec. 18, encouraging shoppers to use cloth bags. More Santa Monicans could be seen using reusable bags every day of the year.

The Santa Monica Airport continued to be a debatable issue on whether it has negative environmental effects of air and noise pollution, as well as safety issues. In October, the Environmental Protection Agency (EPA) met with community leaders who hoped to gain support for banning large jets at the airport. Airport Activist Martin Rubin said that the goal was “to create a joint coalition… to force the FAA to instate a safe minimum distance between the airport and its wary neighbors.

The Final LUCE (Land Use and Circulation Element) and LUCE Environmental Impact Report was finally approved by the City Council, after six years of review and discussion, on July 6, The land use element delineates the distribution of different types of buildings while the circulation element sets out the location of existing and proposed roads, highways, and other modes of transportation. One of the overarching themes in the LUCE is increasing environmentally safe practices, included the much-favored goal of increased bikablity.

During the final hearings, a protest was held at City Hall on July 1 by members of the Pico Youth and Family Center, who called for “environmental justice.” They wanted environmental protections written into the LUCE for their neighborhood, where a planned Expo Light Rail maintenance yard is planned. The Santa Monica City Council responded by passing a motion, introduced by Kevin McKeown, that added language to the Draft LUCE acknowledging “the historic burden on the Pico Neighborhood of community and regional infrastructure.”

Another demonstration was held on June 26 at the beach just north of Santa Monica Pier. “Hands Across the Sand” was Santa Monica’s citizens joining thousands of people on beaches across the country to raise awareness of the critical effects of the Gulf oil spill, and to call for cleaner energy.

1000 residents came to the beach on Apr. 17 for “Nothing but the Sand,” Heal the Bay’s Cleanup Day, in which volunteers pick up trash on the beach. Heal the Bay’s report card, issued in May, stated that overall water quality at local beaches was improved, with 79 percent of sites surveyed during the dry-weather period from March 2009 to April 2010 earning A or B grades. Water quality at the Pier improved during the survey’s final months, with the Pier improvement project funded by Measure V contributing to the improvement.

Other environmental highlights of the year:

The AltCar Expo on October 1 and 2, where affordable electric cars like the Nissan LEAF and the Santa Monica-based CODA were on display and available for test driving.

The Sustainable Quality Awards in May, presented by the Santa Monica Chamber of Commerce, the City, and Sustainable Works. Prizes were awarded to local businesses and non-profits for their efforts in sustainability, and included Co-opportunity, Pacific Park, National Resources Defense Council, and the Sheraton Delfina Hotel.