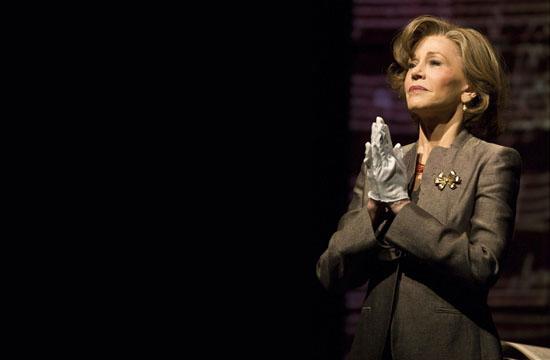 There was something extra special about this particular opening night at the Ahmanson. The excitement was palpable as Hollywood stars, including the indomitable Cher, showed up to support one of America’s most accomplished actresses – Jane Fonda. The outpouring was well rewarded, as Miss Fonda’s performance in “33 Variations,” beautifully written and directed by Moises Kaufman, was spellbinding and truly a visual and emotional treat.

The most elegant, stunning 72-year-old Miss Fonda plays Dr. Katherine Brandt, a musicologist battling Lou Gehrig’s disease, a degenerative affliction that attacks the muscles. She is hell-bent on solving the question as to why Ludwig van Beethoven devoted years to developing variations to a mediocre waltz composed by Anton Diabelli. The highly skilled Fonda discovered every possible nuance and subtlety of her most complex character, filling the stage with her finely honed theatrical presence. Her physical life is so well developed that one could swear the character is losing weight before your very eyes as her already thin frame begins to shrink as her brain ceases sending messages to her muscles. Her speech becomes labored, as though her tongue was swollen inside her mouth.

In the waning days of her physical strength, despite her daughter Clara’s objections, delicately played by Samantha Mathis, Dr. Brandt heads to Bonn to research Beethoven’s papers where she encounters the appearingly stern Dr. Gertrude Ladenburger, well played by Susan Kellermann, who guards the precious archives with a vengeance. Katherine and her daughter have a strained relationship that the worried Clara hopes to resolve before it’s too late. In a subtle transition, the very Germanic Ladenburger becomes a wonderful friend to Katherine, helping her in her quest for Beethoven’s decision. Katherine’s theory is that the master thought he could create a masterpiece from the most banal piece of music.

What makes the story particularly compelling is how playwright Kaufman moves the play back and forth between 1819-1823 and the present, drawing parallels between Beethoven’s obsessive devotion to finishing the variations on Diabellli’s mediocre piece of music and Katherine’s obsession to discovering the answer before she dies. He is losing his hearing while she is losing her body.

Beethoven is played with just the right amount of artistic gusto and temperament by Zach Grenier, while Grant James Varjas plays his unrelenting, caring, devoted assistant, Anton Schindler, who protects his ailing master from creditors and kings alike. Rounding out this most talented ensemble is Greg Keller’s Mike Clark, Katherine’s nurse who falls in love with Clara. The Clark character infuses the play with just the right amount of comic relief that the adorable Keller delivers with impeccable timing.

The technical components are top-notch beginning with the scenic design by Derek McLane, the centerpiece is composed of are movable giant racks of sheet music which accommodate the scene changes, adorned by David Lander’s lighting design, lavishing the stage with brilliant colors. Especially eye-popping is the golden hue when the audience first sees the precious archives letting them know there really is gold buried in the hundreds of volumes of Beethoven’s notes. Projection design by Jeff Sugg lets the audience experience Beethoven’s notes by projecting the sheet music on a rear screen as it is being read by Dr. Brandt or written by the master. Pianist and musical director Diane Walsh, her grand piano sitting off to stage right, plays the corresponding music throughout the evening adding to the enchantment with her virtuosity.

Director Kaufman keeps the action moving at a pace commensurate with the story and although this is an emotional evening of theatre, it is never depressing because it’s primarily about two determined people, living centuries apart, struggling to follow their vision while dealing with extreme physical challenges. It is also about the lives these people touch and how they are mutually influenced.

The standing ovation Fonda and the superb ensemble received opening night paid tribute to a most memorable theatrical experience.

By mirrormmg February 21, 2011
in Life and Arts
Related Posts