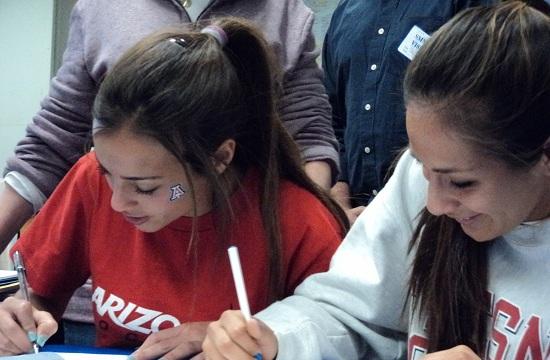 Santa Monica High School senior girls soccer players Julia Glanz and Elizabeth Lyons had decided where they’ll be this fall playing soccer. On Wednesday afternoon, they shared that information with with their moms, coach, principals, classmates and fellow student-athletes.

Left midfielder Lyons, who is known for her speed, signed with Fresno State. Glanz picked the University of Arizona in Tucson over Northeastern University in Boston.

“It was the heat or the snow,” Glanz said after the signing ceremony. “I take the heat.”

While their college futures may be set, head coach Jimmy Chapman told his players and the gathered audience that they still have a season to finish. The Lady Vikings soccer is 10-6-2 overall and 5-0-1 in Ocean League, in first place. The team plays a home game against Culver City at John Adams Midle School today and then faces rival Beverly Hills on Friday.

“We need to win both of these last two games,” Lyons said. “[The outcome] depends on whether we go to CIF [playoffs] or not.”

Lyons, who started playing soccer when she was 6 years old, considered Loyola Marymount and Long Beach State before picking Fresno State, primarily because she was already in touch with some of the players.

“Fresno State made me feel at home,” Lyons said. “I like the coaches there and know most of the players. It’s close to home.”

Allison Ganz, Julia’s mother, said her daughter, who has been playing soccer since she was 8 years old, was interested in competing against some of the best players in the Pac-10. “She is so motivated,” said Ganz, originally from South Africa and a former gymnast whose son also played soccer. “Soccer is her life.”

“This is an honor and recognition for both of them … I’m very proud of both of these girls,” said coach Chapman, a Samohi Spanish teacher by day. “Make the most of this year, of this experience, of these last two months … But more importantly, I want you to remember there’s very much unfinished business, both in the classroom and on the field of play.”