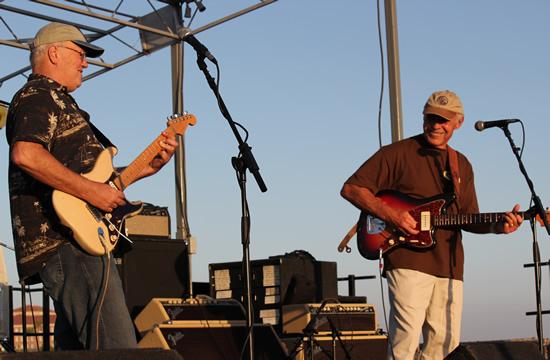 The seventh night of performances at the Twilight Dance Series last night featured three surf rock bands that sent out waves of oceanic sounds to the thousands in attendance at the Santa Monica Pier.

Paul Johnson and Gil Orr of the Duo-Tones took to the stage first to kick-off the evening.

They both began playing guitar in the ‘50s and have followed an endless ride to discover the quintessence of surf music.

They said the love of playing surf guitar had stayed with them their entire lives, which had sent them on an epic journey inside the surf guitar scene.

During their endless summer stints as musicians in the surf rock scene, the pair have played shows with countless numbers of surf bands including Dick Dale and The Beach Boys.

This was their first chance to play at the Santa Monica Pier.

“It was lots of fun,” said Orr after his set. “Especially with the receptive sound of the crowd and the sun setting overhead.”

The Eliminators, led by saxophonist Bill Swanson, took to the stage after the Duo-Tones.

“People love it here near the beach,” Swanson said.

The Eliminators lead guitarist Joe Kurkowski said their music specialized to this type of audience.

“We have natural chemistry,” Kurkowski said. “Communication has always been easy.”

The crowd seemed particularly pleased when the band played their surf rock favorites including “Comanche” and “Tequilla.”

Kurkowski said all three bands at last night’s concert series knew each other quite well.

“We’re all pretty good friends,” Kurkowski said. “Dusty Watson (of Slacktone) used to play with John Blair (of The Eliminators) when he was in Jon and the Nightriders. We’re one big happy family.”

“Dusty and I did a project together recently,” Johnson said. “We did a documentary on surf music.”

Johnson could be seen standing in front of the stage as the band Slacktone took to the stage to headline the evening.

As they performed it was easy to see the concert’s attendees enjoyed modern surf rock, which is a genre of music that is still alive and evolving.

“This is Santa Monica,” said Slackstone guitarist Dave Wronski over the microphone as the audience cheered. “You’re here for surf rock at the pier!”

Wronski quickly delivered on his promise and went slashing up and down the neck of his guitar to show off his amazing speed and dexterity.

Their “cutting edge” surf song, “Bells of St. Kahuna” was waxed with passion and energy.

Raw energy piping into their “edgy” music has led to Slacktone’s success in pioneering their new surf sound.

Soon after the Twilight Dance Series event, newcomers PapaFish got their chance to play some reggae surf punk music at Rusty’s Surf Ranch on the Santa Monica Pier and this kept the energy flowing late into the night.

By mirrormmg August 19, 2011
in Life and Arts
Related Posts