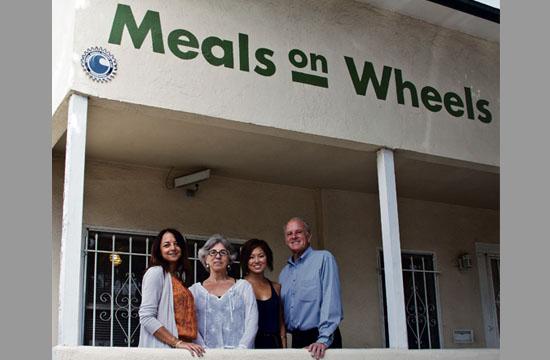 The Rotary Club of Santa Monica has funneled nearly $300,000 into more than 35 local non-profits such as Meals on Wheels West, Santa Monica Boys & Girls Club, YMCA, and Heal the Bay during the past few years.

Many of these organizations have suffered major cuts in City funding and some would have had to cut services without Rotary’s support.

Rotarian Jim Dyer, who has been a member for the past 25 years, said it was more important than ever to support local non-profits.

“The need is endless, especially in these days and getting even more so,” Dyer said. “Within our club, we have a combination of what are called community and youth grants, scholarships, vocational and service projects. These are some things where we just give out a check for a scholarship or youth grant, but in many instances we do grants aimed at capital expenses, not operation expenses. The idea is that it will help long-term elements within these non-profits.”

Among the 160 rotary members, about 10 percent of members head-up a local non-profit or are directly involved, Dyer said.

One of those members is RoseMary Regalbuto, President/CEO of Meals on Wheels West.

While the City of Santa Monica supports her organization financially, she said the allocated funding is set to remain the same for the next four years, which is difficult as the cost of everything continues to rise.

“Things are getting so much more expensive to administer the program, it’s becoming harder and harder,” Regalbuto said.

“The support from Rotary means a lot. I consider them one of my community partners.” Regalbuto said she started this fiscal year with a $59,000 deficit, which was the first time in her 25 years of working for Meals on Wheels West.

“I’m going to have to try and make up the money, but if worst comes to worst, we’ll be taking it from our reserves, but that’s not a mentality we can constantly get into because the reserves will not last,” she said.

She said Rotarians had donated about $10,000 in funding during the past three years to help buy a new refrigerator, freezer, and computer equipment, leaving her more money to make sure healthy and nutritious meals reach her clients.

The Rotary Club of Santa Monica hosts its 4th Annual International Wine, Food & Jazz Fundraiser this Sunday, Oct. 2. The afternoon will feature tastings of dozens of wines from around the world at the Annenberg Beach House.

General admission tickets are $100 each in advance, $125 at the door, which includes entrance to festival for wine tasting, food, music, and auctions.

For more information about the fundraiser, call Ken Waltzer at 310.734.4740 or purchase tickets online at http://santamonicarotarywine.eventbrite.com/.

For further details about the Rotary Club of Santa Monica, visit www.rotaryclubofsantamonica.org.