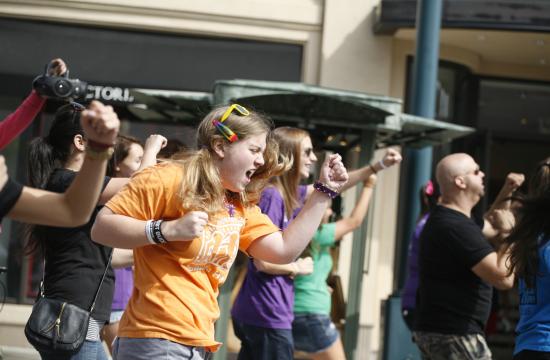 My Mother was good at appealing to our better selves when we were kids. With just a few words, such as “You know there are children going hungry in other parts of the world…” she would influence our attitude toward any dinner entrée. Another great device of hers was to point out how wonderful the weather was outside, as a means of pulling us from some inert indoor activity and getting us out of the house and into some fresh air. “It’s such a nice day. Don’t you want to do something outside?” Her logic was strong, although if I was halfway through an exciting episode of TV’s “Whirlybirds” (two guys that rescued people with a Bell helicopter) it might take a bit more prodding.

The last few months the outdoors has suddenly come into vogue as a staging area for some of the most gripping drama we’ve enjoyed in a long time. Specifically, the “Occupy” movements have proved that there’s nothing quite like large numbers of people outdoors jamming up public areas and chanting to get through to the rest of us that things are wrong with the banks and the inequities of the economy right now. You can send out all the e-mail “blasts” you want, but being downtown and discovering thousands of people taking a stand with their presence gets your attention in a way that no amount of stunning digital graphics ever will.

So-called “flash mobs” might have started out as something fun and different to do with cell phones, but now they are evolving into public theater with very public messages. Last Saturday a group called Best Buddies California, an organization that seeks social inclusion and integrated employment and leadership development for people with intellectual and developmental disabilities, staged simultaneous flash mob events at our own Third Street Promenade and the Ferry Building in San Francisco. You’re out, just doing some shopping… and suddenly the sidewalks have become a stage for making a well-defined and important social point. Something that, at first, looks like an impromptu tribal dance involving the very people Best Buddies wants you to meet and know.

The Doobie Brothers, if you happen to run into them, will sing about “Takin’ it to the Streets” but more often than not they’re doing their singing in a tame and formal setting in an arena or an amphitheater. Okay it’s the Doobie Brothers, so a smallish amphitheater. But they’ll sing of taking action to the streets, then go home and probably connect with an actual doobie. What’s going on right now is that people are in fact taking “it” to the streets.

It’s true that there’s nothing new about marches or protest gatherings outdoors, and there have been public outdoor events for good such as AIDS Walk L.A. that continue to be successful. What I think is evolving is the sense of theater and the degree of planning allowed by mobile devices, and this could lead to a huge change in how we communicate with each other about things that matter. An organization like Best Buddies might be lucky to get two minutes on CNN buried in the middle of a weekend afternoon. But by staging flash mobs, the combined audience of live observers followed by the coverage the event receives is likely bigger than any audience Best Buddies would get struggling for help from corporate media. Certainly the “Occupy” people would have had a hard time getting anybody at CNN on the phone even six months ago, unless they lied and said they knew about a pretty blond girl trapped in a mine or accused of murder in Italy.

What’s striking about all the recent street theater/protest messaging is the degree to which it has all transpired in relative, no-shots-fired peace and calm. And commercial news organizations need fresh landscapes from which to harvest their free content. So thus far, it looks like a win-win.

But then, reality TV felt exciting in the early going as well. Here was “reality” shaped to make theatrical narrative, with cost-saving features such as an unlimited number of male dopes and narcissistic “housewives” ready to abandon their dignity just to get a sense that their lives were bigger than ours. When that appetite for attention grew tiresome, or in at least one recent case contributed to suicide, we moved on.

The new outdoor socio-political theater has a leg-up on reality TV in that the themes involved are not about our lesser banal selfish desires, but rather about our better selves and our shared appetite for fairness in a country that puts itself forward as the model of democracy for the entire planet. That’s a far more interesting and important “hook” than “Jersey Shore.” We’ve assumed for a long time that there has been at least a level of transparency in our government and courts. But perhaps we’ve over-looked the fact that what seemed like a tsunami of free speech for all had in fact become a very controlled spigot running hot and cold malarkey (Glen Beck, The Today Show, news channel round tables) and that our voices had in fact been left out of the mix. Knowing my mom as I do, I believe she might refashion her old appeal to include what’s going on right now. “It’s such a lovely day for arguing about the discrepancies in wealth and power in this country. Don’t you want to go outside and see what everybody’s pissed-off about?”