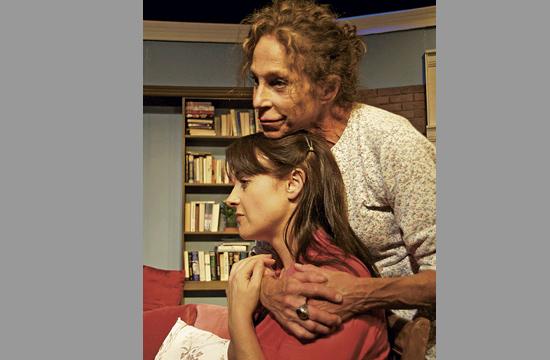 Donald Margulies’ multiple award-winning “Collected Stories,” a Pulitzer Prize finalist, premiered at South Coast Repertory in 1996 and was later produced by the Manhattan Theatre Club in 1997. Subsequent productions included a PBS presentation as well as a production in Los Angeles in 1999 at the Geffen Playhouse as well as a production at London’s West End Royal Haymark Theatre starring Helen Mirren. It was once again performed in March 2010, culminating in its first Broadway run starring Linda Lavin and Sarah Paulson.

This compelling “morality” play, with delicious language, can now be seen in yet another revival as a guest production presented by Diane Ladd and Thalia Buitron at The Odyssey Theatre featuring a most fascinating April Lang as Ruth Steiner, who as a young writer, was catapulted into the literary spotlight as a result of her collection of short stories. As with the elusiveness of fame, Ruth has faded into the literary background and fills her days teaching aspiring writers. One such writer is the very young Lisa Morrison, well played by Natalie Sutherland, who the older writer takes under her wing, making Lisa her protégé.

The action takes place on Josh Shaw’s most appropriate set depicting Ruth’s Greenwich Village apartment. The space is a clutter of overflowing bookcases, piles of newspapers scattered on the floor, notebooks and notepads piled up on her desk and coffee table – truly the home of someone more interested in creativity than good housekeeping.

The play begins with a very funny scene of Ruth communicating with Lisa through a stuck window through which she attempts to throw a key so the young writer can access the front locked door. On meeting Ruth, Lisa is almost tongue-tied and awe struck and treats Ruth with the utmost of respect and reverence. Their respective roles are clearly established. The rather sardonic, weathered Ruth is to mentor this fledgling, nervous writer and the fledgling writer will continue to treat Ruth as though she is the second coming, at least for now.

Ruth begins by analyzing Lisa’s manuscript entitled: “In Between Meals – A Story About Bulimia,” stopping where explanations are needed. In one of the many amusing moments, Ruth questions Lisa’s use of “Tuscan” vase, asking her why she chose that word and whether she had ever actually seen a Tuscan vase. Lisa replies in the negative at which point Ruth invites her to visit a museum and study the vase in question to see if that’s what she really means, admonishing her that, “Everything must have a reason.” Lisa is delighted with that comment exclaiming, “Oh my God, that makes so much sense.” Lisa is also criticized for her excessive use of adjectives with Ruth instructing her to keep her writing simple.

As we move through Act I, a discussion takes place about Woody Allen hooking up with his stepdaughter and that is perhaps the play’s only flaw as it’s presented as though it just happened and was a bit jarring and dated. Ruth’s response to Allen’s behavior is “Movie stars always misbehave – that’s why we invented them.” Lisa reveals that she gave her father a copy of her story on Disneyland, which was an unflattering accounting of their relationship, and that story had just been published in a literary journal. Ruth is upset that Lisa submitted the story without telling her as up until that point, she had been acting as her “agent” by submitting stories with a cover letter over her signature. The first sign of what could be professional jealousy rears its head ever so slightly.

As the banter continues, Ruth reveals a very personal story about an older man by the name of Delmore Schwartz with whom she was madly in love and had an affair when she was in her 20s. She describes him as a 44-year-old, overweight, man with yellow teeth, adding, “I took a lot of shit from him in the name of poetry.” She clearly adored him but on entering his apartment one day, found another young woman taking care of him. She left and never went back. This was a deeply pivotal point in her life and indeed in the play as very soon the question of betrayal, morality, and literary ethics will be posed in this well-written, provocative material.

In Act II, the young Lisa has had her first book of short stories published and is now the new darling of the literary set. A mature Lisa, appropriately dressed in a stylish business suit, is giving a reading at New York’s 92nd Street Y, the famous hotbed of cultural activities and begins by reading the Prologue that is Ruth’s story about Delmore Schwartz. I must say the audience did let out a little gasp at that moment, as it was shocking.

Lisa separated herself from Ruth and hadn’t seen her mentor in several months. She finally pays her a visit and at first there is some polite banter including a reference to the revered magazine, “Life’s too short for the New Yorker.” The strain is apparent and it becomes clear that the roles have been reversed as the now very confident, arrogant Lisa coldly tries to explain to the devastated, crumbling Ruth her justification for stealing Ruth’s very personal story about her former lover. The older, worn out writer is steadfast in her accusations that Lisa did not have the right to steal her life, a moral and ethical violation of the highest order and did conjure up images of “All About Eve” and the irony of the reversals of fame, fortune, and the student-teacher dynamic, with all the inherent possibilities.

Directed by Terri Hanauer, the acting from both Lang and Sutherland is impeccable with each of them giving a fully actualized performance, developing the sub-textual aspects of their complex characters. One negative note is the unimaginative blocking that for a good part of the first act, had a section of the audience looking at the back of Lang’s head. There was ample opportunity to move her around so that the audience could see more of her expressive face. This was clearly a poor choice on the part of the director. Other than that, this is a very fulfilling evening of theatre.