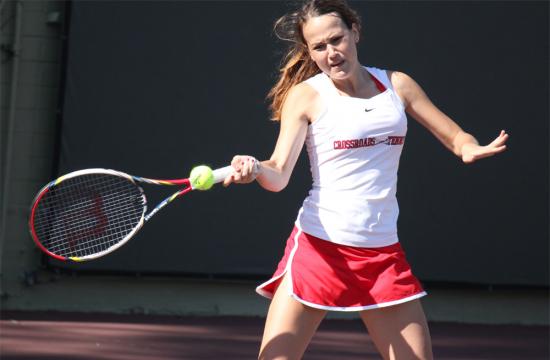 Three weeks into the season and the Crossroads Women’s Tennis team (3-3) are showing signs of greatness with Roadrunners Shannon Gibbs beating Windward’s number one Lizzy Isgar 6-1 in an exciting match that saw both players exhibit their powerful shots on the Reed Tennis Courts Thursday.

Isgar went on to play her second match against Sophie Sinclair and won against Sinclair 6-4, but not until after Sinclair gave Isgar a good scare starting off the match 2-0.

Overall the Roadrunners lost the team match to Windward 10-8 but they did so missing key players Kassy Koenig and Sabrina Harris.

The Roadrunners will get their chance at retribution against the Wildcats later this season at Reed Park on October 18.

According to Spencer Wall, Head Coach of the Crossroads Women’s Tennis Team, his girls still have a chance at winning league even with the point loss to the Wildcats during their first meeting this season.

Wall’s first objective for the Roadrunners is to win the Dephic league and knock off defending champions Windward later in the season.

Next game for the Roadrunners is against Marshall at Reed Park Monday at 2:30 p.m.