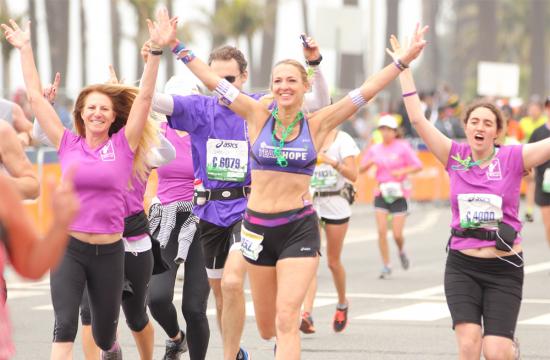 Santa Monica athlete Julie Weiss, who ran 52 marathons in 52 weeks to help fight pancreatic cancer, will be honored May 19 as Sen. Ted W. Lieu’s 2013 Woman of the Year for the 28th Senate District.

The 42-year-old, who describes herself as a real estate consultant “by day,” recently achieved her goal of competing in 52 marathons in 52 weeks, all to raise awareness – and nearly $200,000 – for the Manhattan Beach-based Pancreatic Cancer Action Network.

Along the way, she raised public awareness, hope and money nationwide for pancreatic cancer, the fourth-leading cause of cancer deaths in the United States.

Weiss’ adventure began in 2007 when she found a soulful response to the simple act of taking a jog during a family vacation. One morning, the self-described struggling young mother of two, in her estimation overweight and reliant on antidepressants, got off the couch.

“I starting running and soon discovered that I didn’t need my meds and my extra weight melted away,” Weiss said of the life-changing moment.

Lieu will formally present Weiss with her Woman-of-the-Year award Sunday, May 19, 2013, at about 10 a.m. during closing ceremonies at the finish line during PurpleStride Los Angeles, a 5k run and walk at Exposition Park in Los Angeles to help raise money for pancreatic cancer.