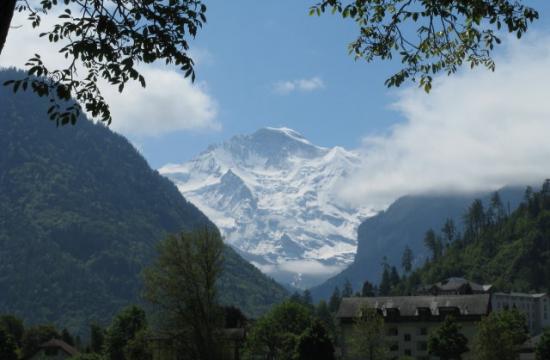 Some things never change in the Bernese Oberland of central Switzerland, where the combination of stunning mountain scenery, glacial lakes, and easy accessibility is unparalleled.

On a clear day (there are a surprising number of those) you can still look up from this town’s central park to the year-round snow-whiteness of the Jungfrau, a 13,642-foot peak framed by two steep green hills.

Its imposing glaciers belie the ease of getting near the pinnacle, which locals call the “top of Europe.”

But some things do change: The premium watch shop that once stood beside the 400-year-old dowager Grand Hotel Victoria Jungfrau on the High Street has morphed into a bustling Hooters.

A few doors east is a sex shop, a far cry from the Swiss Army knife emporium that once occupied the same storefront.

Where once most visitors came from England and France, now the streets and premium shops swarm with bustling Chinese, and Arab women in long black abayas.

All that just makes the area even more interesting.

Every small valley in this spectacular mountain region still seems to be served by an aerial tram, a cog rail line or a funicular, with the occasional chairlift.

The most famous of these is the 110-year-old cog rail line rising steeply from a large parking structure in the waterfall-laced Lauterbrunnen Valley to the highest spot anyone can reach by car or rail in Europe, the gourmet Jungfraujoch restaurant at 11,333 feet, where wienerschnitzel is available almost any time of day or year.

Stark white scenery surrounds you both in the restaurant and during the last 3,000 or so feet of the ride up.

The Jungfraujoch train ride is part of many organized tours here, so each coach can look and sound like a mini United Nations.

On one June day, a single rail car bore tour groups from India and China, abaya-clad visitors from Kuwait, their black robes and head coverings allowing only a small slit for the eyes, plus a sprinkling of Americans, Brits and Australians.

Everyone talks, except the most covered-up of Arabs.

“I’m from Kuwait,” says one man as his black-clad companion silently viewed the scenery. “Where’s that?” asks a Down Under voice.

Of course, there are many cheaper ways to enjoy the scenery of the Oberland (German for “the land above).

Hiking trails (free) run beside every river in the region and reach from the icy waters of the lakes of Thun and Brienze (one just east of Interlaken, one just west) up to the high cliffs of mountains like the famed Eiger (13,026 feet) and its neighbor, the Monck (13,426 feet), which together with the Jungfrau form a  granite massif spanning many more square miles than the better-known Matterhorn, slightly to the south.

Round-trip fares on aerial trams, chair lifts and funiculars run from 17 francs (about $20) for a gondola ride to Lake Oeschinnen near the hamlet of Kandersteg, to 50 francs (about $54) for a 60-minute tram ride just beneath the sheer north face of the Eiger to the tiny skiing and hiking town of First.

If there’s far more recreational access here than in either the Rockies or the Sierra Nevada, that’s partly because the Swiss have been developing it for more than 2,000 years.

The Swiss military famously uses the mountains, too, with cleverly disguised doorways — some quite massive — leading into large bases hollowed out of some of the country’s many peaks.

Waterfalls crash down seemingly everywhere near the base of the big mountains, the valley of Lauterbrunnen offering a hiking, biking or auto tour past 72 of them as they plunge from cliffs running 1,000 to 2,000 feet high.

About 10 miles east is the idyllic Giessbach Falls, which make their way down a steep mountainside via a relay of cascades to Lake Brienze. Walkways take visitors directly under these falls at several levels.

Then there are the large lakes of Brienze and Thun.

These can be placid mirrors one moment and storm-tossed maelstroms the next, but are generally calm during the peak summer months of July and August.

These things never seem to change.

Neither do some restaurants: The Gasthaus Baren in Reichenbach near Kandersteg has been owned by the same family since 1542; it still serves some of the finest food in the region.

One good base for seeing the area might be a room in the 136-year-old Hotel Seiler au Lac, which sits in the hamlet of Boenigen at the west end of Lake Brienze, a 10 minute drive or bus ride from the center of Interlaken.

Most rooms here offer lake views and balconies, with prices starting at 160 Swiss francs (about $175) for a single room with breakfast and a four-course gourmet dinner.

That’s a bargain for a four-star Swiss accommodation, especially since the tab includes city bus passes for each guest.

Lake-view doubles go for 330 francs (about $360) in the high season of July and August.

For a very different mood, there’s the Grand Hotel Giessbach, near the east end of the same lake.

A classic Victorian 19th-Century structure, this hotel offers views of the falls, the lake and its surrounding woodland.

A private funicular brings guests from a lake boat stop far below to the hotel terrace, where fine dining awaits. A waterfall-view room for two with full board runs 400 francs nightly (about $440).

On the other end of the pricing spectrum is a sparkling new youth hostel along the main bus line just east of Interlaken’s center.

There’s also the Hotel Jungfrau in Lauterbrunnen, with dormitory-style accommodations for just 12 francs nightly (about $15).

The area features plenty of pricier choices and many in between.

And since this is Switzerland, you can count on any room being immaculate, whatever the style and price.