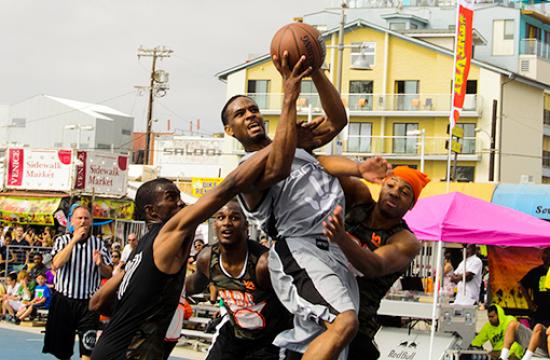 Venice ball began Sunday afternoon in a day where eight teams duked it out in four games on the Venice Beach basketball courts with the featured game of the day being game three that squared the Summer Pro League (SPL) Team Boogie 7 against the Beach Warriors.

Player of the Game was SPL’s Isaac Jones, who had an extremely efficient game with 16 points, 10 rebounds, two assists, two steals, and one block to go 8-11 shooting from the field.

SPL teammate of Team Boogie 7, Robbie Robinson, also posted a solid 22 points and added eight rebounds.  Robinson gifted his team as well as the crowd by showing off his high flying dunks and skying above everyone to nab the tough rebounds.

The Beach Warriors Jet Blue led his team with 24 points, nine rebounds, and four steals wowing the crowd with his ability to jump above the rim, throw down massive dunks and convert rim-rocking alley oops.

Nicko Ansom, organizer of the Venice Ball event, thought that the featured game setting SPL’s Team Boogie 7 against the Beach Warriors was an exciting game to watch.

“This game can best be described as being a game of runs,” said Ansom. “SPL jumped out to an early lead, catching the Beach Warriors on their heals. The Warriors’ team captain, YouTube sensation, Mani Love, standing at 4’5” struggled to get his offense going at first.  He started to find a groove by setting up his teammates with some nice dimes and one in particular that had the entire place go crazy.”

The “one in particular” play was a perfectly designed in bounds play that had Mani in bounding the ball, prior to tossing up a perfect alley oop to his teammate, Jet Blue, who was cutting down the lane after curling off a screen.

Team Boogie 7 jumped out ahead late in the game once again, but this did not deter the Beach Warriors who won the game last year.

The Beach Warriors slowly chipped away at the deficit and with seconds to spare, they were able to tie the game up on a tip put back, thanks to the late heroics of Blue and this sent the game into overtime.

Team Boogie 7 managed to capitalize on a couple miscues in the two minute overtime and sealed the deal to hand them their first win of the season.

Other games played on the Venice courts Sunday afternoon saw the Rise of the Nations squeak out a victory over Jet Lux 80-78 with Tristan Wilson “T-Will” -who wore his sunglasses the entire game- nabbing the player of the game.

In game two the NCAA boys blew out the White Collars 73-51 with the player of the game awarded to AJ Harris aka “The Chosen One” who did a little bit of everything leading his fledgling team with 15 points, ten assists, three rebounds, six steals, and one block.

In game four Sunblock put up three more points then the Mean Ones to win the defensive battle 53-50.

No one player from Sunblock stood out to earn the Player of the Game award as it was a team victory.

“Overall it was a great day at the VBL, full of entertainment and amazing people,” said Ansom.  “We would like to thank our sponsors for all of their support:  Redbull and RVCA.”

SPL is partnered with And1.

Next grip of games will commence Sunday on the Venice Courts at 11:00 a.m.