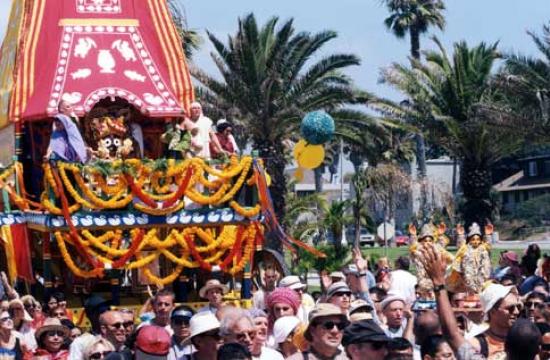 This Sunday, beginning at 10 am, three 40-foot authentic chariots from India will roll from Santa Monica to Ocean Front Park in Venice in an impressive display that is the heart of the 37th Annual Festival of the Chariots.

The parade will resolve itself in a festival site with entertainment, classical dance, “a free feast for thousands,” and booths.

All of this will bring together “the finest in Indian culture” according to the event’s website, although I believe that statement will be backed-up by anyone who has attended the festival previously.

Yet some of you will miss it, and others may avoid it all together. And maybe that’s because the event is wholly put together by the International Society for Krishna Consciousness (ISKCON). And so that’s, um, religious, isn’t it? Would it help to tell you that, if he was still with us, George Harrison would likely take in this event? Or as musician Nick Lowe might offer… what’s so funny about peace, love and understanding?

Borrowing from the website for the event (and apologizing for the ‘thumbnail’ overview here) I will further relate that the Festival of the Chariots celebrates Lord Jagannatha, the Lord of the Universe.

I’m not saying he’s your Lord of the Universe, but he matters to those who dedicate to Krishna Consciousness.

Lord Jagannatha is a particular Deity form of Lord Krishna.

There are three chariots, one for each of three deities; Lord Jagannatha, Lord Balarama, and Lady Subhadra.

The chariots are decorated with flowers and balloons and are pulled with long, thick ropes by hundreds of people.

Which is exactly why this is a great day for the whole family.

Because we’re living in a time where the words “freedom” and “liberty” are being dispensed and manipulated with abandon, similar to the way “delicious” and “wholesome” are thrown about during any commercial for processed food products. This coming Sunday, you can take your kids to the Festival of the Chariots and witness actual, down-home, old-school American freedom and liberty to express one’s beliefs in our own city as ISKCON opens its heart to anyone willing to observe and enjoy their celebration.

It’s at least as important that we all share something positive like the Festival of the Chariots as it is that we all grind our teeth in sync to the Zimmerman verdict.

Let’s not even get into how we’re chipping away at our ability to gather in public without violence.

Instead, let me ask you when you last spent any serious hang-time learning about a faith or consciousness other than your own? And they do hand out a ton of free food.

I’m not sure what we’d use to gauge our current national level of tolerance, but there are certainly some things we know we would not use.

The Republican war on women, for one. The repression of voting rights disguised as concern for proper voter identification. The struggle to include any form of amnesty in immigration legislation. The embarrassing way the religious right keeps targeting gay marriage even after issues are settled. Maybe in a time of instantaneous information on our smart phones, which can be used to gather a half-dozen views on the same subject, it’s difficult to allege that we are moving backwards.

But it is striking the way people in other nations are fighting and dying on their streets for freedom and meanwhile… we’ve got organized armies here fighting to keep two men from kissing.

A personal note definitely colors my support of the Festival: Years ago I worked in a restaurant where I was completely out of my depth as a “manager.” But I got the gig through a friend and I was tolerated by the staff, although they all knew I had no idea what I was doing.

The night bartender was a highly intelligent grad student and when things got slow we would knock around ideas.

Keep in mind this was the 80’s and Reagan, to many of us, seemed to be Nixon on a Nyquil drip.

Later, a book assessing the Reagan years would actually be titled “Sleepwalking Through History.”

One night the bartender and I got into it about religion and I offered that I wasn’t certain that the children of those adults dedicated to Krishna Consciousness were getting a fair shot at a childhood, what with their heads shaved and the saffron robes and the diet, etc.

The bartender argued that the “childhood” I was so worried they were missing might not be all that great.

“You mean, like, Christmas and Santa Claus?!” he fired at me. I don’t think either of us won any major points that night, but having my views shaken and stirred was good for me.

The Festival of the Chariots may not cause you to enlist, so to speak, but it is enlightening and it’s unquestionably meant to educate and promote communication.

It’s free and it’s fun. It’s a classic exercise of free expression and I have yet to hear any message emanate from it that wasn’t at some level about hope: Hope that all might appreciate and love the experience of life.

And as Nick Lowe might tell you “searching for light in the darkness of insanity,” or the middle of summer, is not a bad way to spend a Sunday.