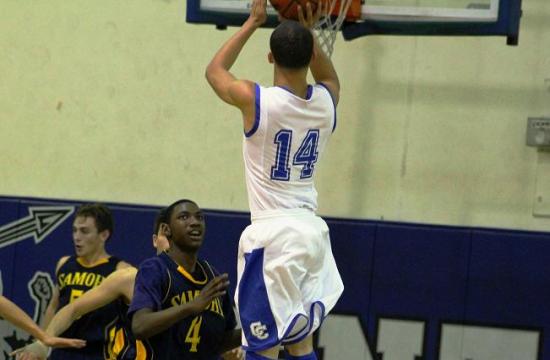 Culver City-The road back to glory is usually a hard one to navigate. The Santa Monica boys’ basketball team is learning that lesson. A year removed from being crowned as kings of CIF Southern Section Division 1, Samohi has found out that it is much more difficult to be the hunted as oppose to being the ones doing the hunting.

That comes with the territory when you’re the reigning CIF champs and become one of two of the best teams in the state of California. But the Vikings are finding their way this season. After playing a tough preseason schedule, Samohi looks like it has benefited from that early season grind with two straight Ocean League wins over Inglewood and Culver City.

After getting past Inglewood in a home game, Samohi went into a tough environment at Culver City and managed to prevail with the win.  Samohi swept Culver City on its way to the Ocean League title last year. Samohi got off to a good start this season against their league rival by defeating the Centaurs for a 62-53 road win.

By defeating Culver City, Samohi recorded its third straight win following four consecutive losses. Samohi locked in defensively in the fourth quarter to prevail with its 10th win of the season. For the first three quarters, the Vikings and the Centaurs were locked in a pretty close game with Culver City holding a 40-33 advantage heading into the final period.

Then the sky fell out for the Centaurs. Samohi broke open a close game by outscoring the Centaurs 29-13 in the fourth quarter to walk away with the win.

Last season, Samohi posted easy double-digit wins against Culver City.  Obviously, this is not last year. This game would prove to be much tougher. However, in the end, the Vikings finally got their act together to earn their second straight Ocean League contest.

Last season, Samohi claimed the CIF title and made it all the way to the state championship game where they fell to Pleasant Grove.  Neither team-Samohi nor Pleasant Grove-are what they were last year. Pleasant Grove is having its share of struggles this season as the Vikings are, though Samohi did defeat the Eagles in December at the Holiday Hardwood Invitational.

This year’s team is treading to stay above .500 and has played with inconsistency so far. The Vikings may have turned the corner in their play, beginning when they took apart and defeated Inglewood in their first league game this year. This challenge would come against a Culver City team playing with high intensity and playing in its own gym.

Coming into this game, both teams were pretty much dead-even in the scoring column, averaging just above 61 points per game.  League play always seems to bring the best out of teams and individuals. Samohi and Culver City went at each other as the scoring in the first three quarters would indicate. The Centaurs held the edge after first quarter, outscoring the Vikings 15-14.

The second period was just as intense as both teams seem to get a bit chippy, particularly near the end of the period when free throw shooting became a big part of the quarter. Leading the way for the Vikings were Travis Fujita, Jonah Mathews and Chris Johnson.