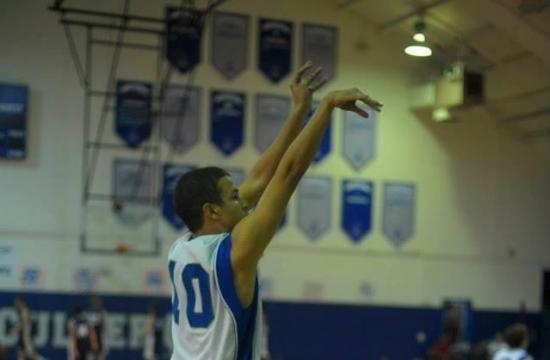 Kevin Kelsey’s Pacifica Christian boys’ basketball team struggled throughout the regular season, finishing fifth in the Liberty League. However, the Seawolves made it into the playoffs and came within a game of playing in the CIF Southern Section Division 5AA championship game.

It was a good run after a tough season. The Seawolves pulled off the upset of the year when they defeated Brethern Christian in a quarterfinal game. This season has been quite a journey for Kelsey and the Seawolves, who almost lost one of their own when star Kyle Barnes had to overcome traumatic injuries suffered in the fall from a accident.

“Early in the season, we lost to fifth ranked Chadwick; I printed out the polls after that game and shoved them in the kids’ hands. I wanted them to see that they are capable of being great, but that their youth, inexperience, and lack of consistency could hold them back.

Shortly thereafter, we beat three top 16 teams, and my boys began to believe that they could be good. My coaches and I were diligent in showing and breaking down game film in order to impress upon them the importance of defense. Our approach can be crystallized down to “defense is the priority in every quarter.” We ended up being ranked eleventh in our division (only four other teams played as difficult a schedule as we did).

One highlight this year was the presence of 10 U.S. veterans from the Seawolf (Vietnam) Navy Unit at our Homecoming game! These men are the inspiration for Pacifica’s mascot, the Seawolf. They presented a flag, a plaque, and a framed picture of their helicopters to me at halftime, but most importantly they reminded our boys that they were playing for something bigger than just themselves. It was a patriotic and poignant moment.

Losing two of our final three league games just weeks ago ripped our hearts out, but those losses gave the players a bit of a chip on their shoulders and reinforced the need to put each other first at all times. I went into our play off games against No.6 seed Pasadena Poly and No.3 seed Brethren knowing they were stronger teams, but that we only had to beat them one time, and I knew our defense would be difficult for them to figure out.

Senior starter, Kyle, had to come back from a near death accident on Oct. 31; he was in ICU at UCLA’s trauma unit where he had his spleen removed and major facial/dental reconstruction. Two of his doctors happened to be the parents of our junior guard Derek Lorenzo.

Kyle’s Christian faith and love for the game and his team mates propelled his getting back on the court after Christmas. His courage inspired our team. He had the game of his life against Brethren with 11 points and 10 rebounds — to clinch the biggest win in our school’s history.”