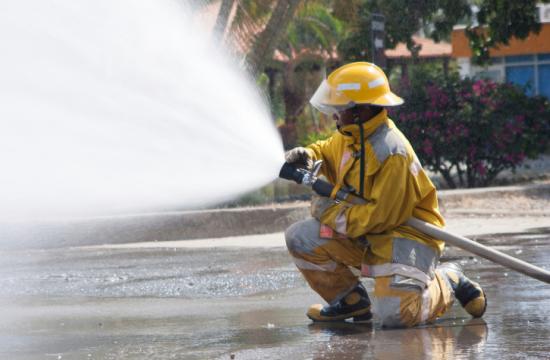 The blaze broke out inside one unit in the three-story building in the 600 block of Queen Street about 2:30 a.m., said county fire Dispatch Supervisor Michael Pittman. The flames left the building fully involved, and more than 55 firefighters battled the fire before declaring a knockdown at 3:21 a.m., said county fire Dispatch Supervisor Miguel Ornelas.

Two people died in the blaze, said Inglewood police Lt. Oscar Mejia. Their names were not immediately released. According to media reports from the scene, they were a woman and her daughter.

County fire Inspector Randall Wright said a firefighter suffered minor injuries and was taken to a hospital for treatment. Two other people were transported for hospital examination as a precautionary measure, he said.

The American Red Cross was called to the scene to give 15 building residents relocation assistance, Wright said.

The cause of the fire remained is under investigation, he said.