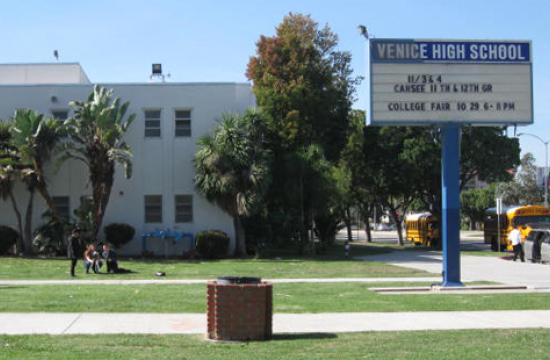 Los Angeles County prosecutors declined to file charges against more than a dozen Venice High School students who were suspected of being members of a ring that allegedly sexually assaulted a pair of girls both on and off campus, it was announced Wednesday.

Greg Risling of the District Attorney’s Office said there was “insufficient evidence” to pursue the case.

A total of 15 students were implicated in the alleged sex ring. Most were arrested over the course of several days in mid-March. The suspects ranged in age from 14 to 17. The ages of the victims were not released, but police said they were in their mid-teens.

An LAUSD source said a group of male students allegedly conspired to pressure girls into having sex, threatening to ruin their reputations. The investigation began when police received information from school administrators about  “a possible victim of a possible sexual assault,” according to Los Angeles Police Department Cmdr. Andy Smith said.

Prosecutors initially declined to file charges against one of the students, then opted May 8 against filing cases against the other 14 teens, Risling said.

The status of the students with the Los Angeles Unified School District was unclear. The district issued a statement saying its review of the case was confidential and officials cannot comment on its outcome.

“As soon as the Los Angeles Unified School District learned of the alleged incidents, we informed the proper authorities as required by law,” according to the district. “The district completed its required administrative review and evaluation of school safety and campus climate and facilitated the required education code due process of involved students.

“Since the review is confidential, we can’t comment on specific actions. This process is unaffected by the district attorney’s decision not to press charges.”