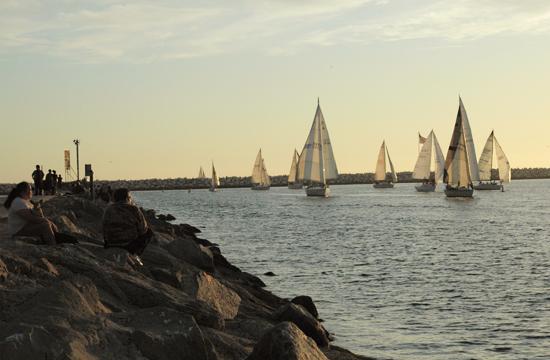 A scuba diver was rescued this morning after he became stricken off Marina del Rey.

Deputies were notified about 9 a.m. that a diver was having difficulty breathing after returning to the surface from a recreational dive in Santa Monica Bay, according to the Los Angeles County Sheriff’s Department.

Deputies aboard a patrol boat from the sheriff’s Marina del Rey Station and a lifeguards from the county fire department’s Baywatch unit responded and met the vessel El Dorado, from which the victim was diving, authorities said.

They transferred the victim, who was by then unconscious, to the sheriff’s patrol boat and started cardiopulmonary resuscitation.

“After approximately 45 seconds, the diver started breathing on his own,” according to a sheriff’s department statement.

A U.S. Coast Guard helicopter was summoned to take the victim to Catalina Island for emergency hyperbaric chamber treatment.

A rescue basket was lowered from the MH-65 Dolphin helicopter, which was dispatched from Coast Guard Air Station Los Angeles, and the diver was flown to Catalina, officials said.

When deputies arrived at the island, they were informed that the diver was conscious and talking while being treated in the hyperbaric chamber.

“The diver has since been transferred to a mainland hospital for further observation,” according to the sheriff’s department.