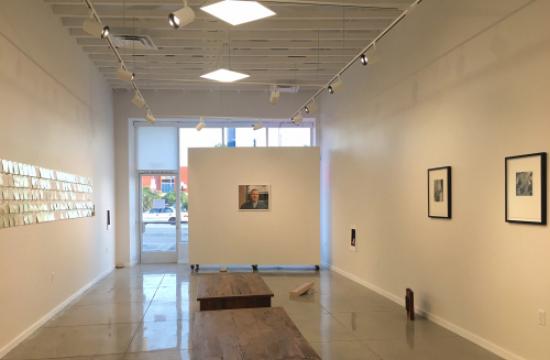 Open Mind Art Space is pleased to present The Man Who Loved Flowers, a debut solo exhibition featuring works by Los Angeles-based artist Brandon Stanciell.  An opening reception will be held for the artist on Saturday, May 14th from 7:00 PM – 10:00 PM, with a live, half hour-long art performance by the artist starting at 8:00 PM in which the artist will be placing flowers in a model’s hair. The exhibition will be on view from May 14th through June 11th, 2016.

The Man Who Loved Flowers brings together two series of portrait photography by Brandon Stanciell, who’s main focus is color.  Flowers play an important role in Stanciell’s photographic work as an added element to soften and strengthen his subjects, and bring out their natural beauty.  Only with the flowers do the portraits turn into delightfully inspiring images.

In his Here, Take These series, Stanciell places his subjects against a plain white background, and incorporates flowers to infuse color into each photograph, thereby accentuating the simplicity and grace of his subjects.  In his other series, The Boys Who Loved Flowers, color takes on a powerful meaning. Stanciell attempts to reverse the negative misconceptions and stereotypes of black men that are often labeled by the media.  “We’re portrayed sometimes as ‘aggressive’ or ‘thugs’ and that’s not always the case in many black communities”, says Stanciell. By photographing young black men with flowers, he hopes to evoke feelings of sensitivity and peacefulness; words which are not commonly associated with black men in American society.

Brandon Stanciell recently moved to Los Angeles from Palmdale, California, to pursue a career as a professional photographer. His work has been shown in various galleries throughout Southern California, including the UCSD Art Gallery at the University of California, San Diego. Stanciell has also been featured in several magazine articles, including an online article by the Huffington Post, which coined him to be part of a social movement led by bloggers and artists who are “redefining black masculinity”