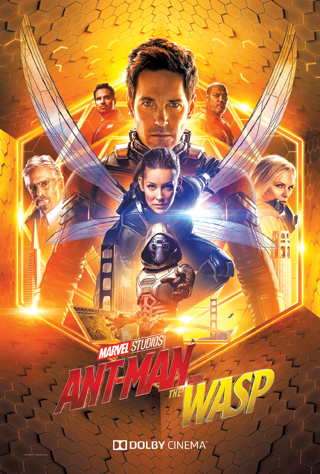 “Ant-Man and the Wasp” is more than just a carefree romp with your favorite stars wearing action hero suits. Try not to see this when you’re dead tired or after you’ve been at happy hour with your friends, because there’s a lot going on that you could miss if your senses aren’t sharp. The comedic timing of the actors is brilliant and the narrative is rapid-fire and I don’t want to ruin your experience by describing it in detail. Just be ready for a lot of double takes and hilarious confused identity scenes. It may have you questioning how much you prejudge people and animals by their looks and sounds.

The story of Ant-Man is built around the concepts of Quantum Physics, which (in an extremely simplified definition) state that everything in the universe has both particle nature and wave nature at the same time, and that there is possibility of existing in more than one plane at the same time. The movie relates these ideas to our perception of identity and image – how we as humans see ourselves, and how we relate to other beings. Take ants for example. They terrify us instinctively because they are tiny and highly efficient, and we cannot seem to control their mass communication system. Ants are portrayed a bit uncharacteristically in this film.

Paul Rudd is perfectly unflappable as “Ant-Man,” who underneath his relaxed facade is a divorced Dad and recently now an ex-con. Michael Pena is hilarious as “Luis” and practically steals the show. Hannah John-Kamen is an incredibly skilled actress and nails the role of “Ava,” the ghostly shape shifter. She displays years of pain and anguish in her face making you think twice about disliking her in spite of her evil nature. Also giving standout performances are David Dastmalchian as “Kurt” (great deadpan comedy), Randall Park, Michelle Pfeiffer, Michael Douglas and Laurence Fishburne. This is director Peyton Reed’s second Ant-Man. His first was just as hilarious. His background in television directing, Upright Citizens Brigade improvisation, and as a DJ in college, informs his grasp of tightly timed comedy.

The movie will have you asking what is fast, what is slow, what is old, what is young, what is big what is small, what is time, what is reality – you know, all those physics questions, as they pertain to your daily life. The film’s ability to laugh at itself as a comic book hero blockbuster is commendable. Comics are our modern day version of ancient mythology – Greek, Roman, Irish, Norse, and the list goes on. Our comic book superheroes are their gods. The way the story is presented suggests that we would do better to look at others as a clean slate in each moment of interaction. It’s a great exercise we should all do regularly.