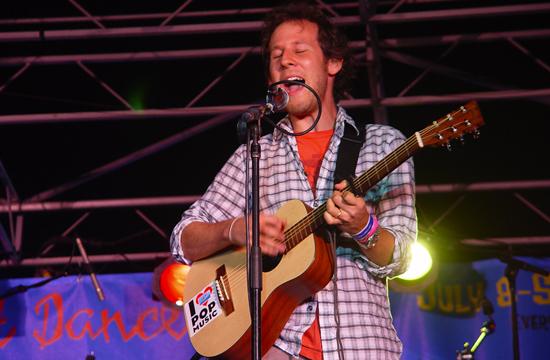 The Santa Monica Pier went down under for “Australia Rocks the Pier,” the second concert in this year’s Twilight Dance Series.

“We can all be Australians tonight!” said Mayor Pro tempore Pam O’Connor.

O’Connor then handed the microphone to the MC of the night Australian actor and musician Cameron Deddo.

He then told the crowd that they must greet all three acts the Australian way.

“G’day mate!” thousands yelled to welcome artist Ry Cuming, who kicked off the night with songs he will be performing on tour with Maroon 5 this summer.

The band Brother followed, rocking the stage with kilts, vocals, guitars, bagpipes, drums and a didgeridoo – “the sound of the earth.”

Lee was playful with the audience, cracking jokes between songs and inviting people to repeat the lyrics and sing along.

He even altered the lyrics of his hit “Catch My Disease” to fit the venue.

“I was backstage at the Santa Monica Pier,” he sang. “And that’s the way I like it.”

He jokingly requested a fake encore to avoid wasting time by turning his back to the crowd for about 30 seconds and turning around.

“Thank you, you shouldn’t have,” he joked.

He ended with “We’re All in This Together,” a popular song that got the crowd singing until the very end.

Audience members were excited for the Australian themed night at the Pier.

Carol Bertoia came all the way from Palm Springs to see Brother perform.

“I saw them 10 years ago in concert,” she said. “I love all the Aussie instruments and the way they sound together.”

Kate Wolman and her husband, who was sporting a “G’day Mate” t-shirt, heard about the concert through the Australian embassy.

“I’m not familiar with the bands,” Wolman said. “But I’m here supporting all the Australians in Los Angeles.”

Wilma Sladen, Jordana Roberts and Roselyn Bygate (mother, daughter and aunt) traveled from New York, Scotland and London to vacation together in California.

Last year, they also vacationed in California and saw Joan Baez perform at the Twilight Dance Series so they wanted to come back for more music.

“We love these events,” Sladen said. “It’s a great idea and fantastic that the city does this.”

“Sand, the sea and music for free – can’t get any better than that,” Roberts added.

The concert ended with a bike giveaway and raffle for two round-trip tickets to Sydney, Australia.

By mirrormmg July 16, 2010
in Life and Arts
Related Posts