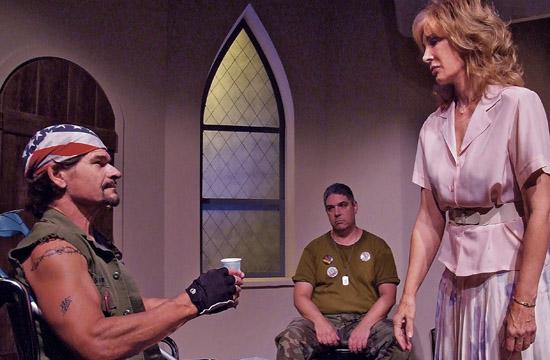 Thirty-six years after the Vietnam War ended, the name Jane Fonda still has a polarizing effect on many people who never forgave her for her anti-war activities, including her infamous visit to North Vietnam where she posed for photos with the Viet Cong on an anti-aircraft tank.

In an effort to set the record straight, according to press notes, writer-director Terry Jastrow researched that period and tried to interview people who were directly affected by her activities, including war veterans, most of whom refused to cooperate. Jastrow focuses his script on an obscure meeting that took place in Waterbury, Connecticut on June 18, 1988 in St. Michael’s Episcopal Church between Fonda and hostile war veterans who, along with many Waterbury merchants, were boycotting the filming of her movie “Stanley & Iris,” which co-starred Robert de Niro.

Interwoven throughout the play are archival newsreels depicting events taking place around the war, including the burning of Fonda in effigy. This is followed by a few choppy scenes, in which the actors throw away the lines, so that the play does not take off immediately. It finally finds a pace when Anne Archer, in an emotionally controlled, strong performance as Jane Fonda, enters the room filled with angry vets. She wants to tell her side of the story and to try to convince them to allow her to make the film. The explosive accusations and confrontations begin.

In an effort to try to justify her activist actions, Archer’s Fonda delivers very long speeches explaining her involvement in the context of her life, as well as quoting newspaper reporters such as Walter Cronkite and David Brinkley whom we see on screen, as well as clips of President Richard Nixon planning strategy with Henry Kissinger and chief architect of the war Robert McNamara, who, years later, finally admits in his book that the war was wrong. One of the vets sneers at her, saying “You sure like to quote other people,” to which she replies, “I’m an actress, that’s what I do.” She talks about her father, Henry Fonda, pleading with her to give up her activities, saying she was unable to stop despite death threats against the two of them.

Again, using archival newsreels, Jastrow touches on the Kent State massacre, the historic 1970 anti-war rally in Washington, D.C. in which an estimated 100,000 people participated, and an assortment of other germane events. Fonda tries to support her position by saying that 70 percent of Americans were opposed to the war and tries to defend herself saying, “I wanted to be taken seriously and I did what I did to stop the killing on both sides.” She does admit she was accused of not helping the peace cause but was actually hurting it.

The hostile attitude towards Fonda continues throughout most of the play with each of the vets telling their experiences and how her efforts hurt them. They accuse her of being the reason America lost the war and said if it were an “official” war, she would have been tried for treason. At one point, the irascible Archie, played beautifully by Terrence Beasor, shouts at Fonda saying, “Why would anyone give a sh*t about what an actor has to say?” and later tears up a poster of Fonda as “Barbarella.” Another attempt to insult Fonda was Robert Foster’s angry Tommy showing her a urinal sticker with her likeness captioned “Hanoi Jane.” At that point, she walks out of the room, but does return after she cools off and the action continues. Eventually, there are very interesting transitions in the characters and their attitudes toward each other and towards Jane, in particular. Is forgiveness possible? One particularly poignant scene reveals that, it can be.

The outstanding acting ensemble includes a very sensitive James Giordano as Buzzy, who tries to illustrate the cost of American soldiers, by quietly, but deeply emotionally, describing walking his platoon into a slaughter, and Don Swayze as wheelchair-bound Don, who painfully relives the moment his legs were blown off. A strong Jonathan Kells Phillips, as Larry, shares his haunting experience when he accidentally shot a young girl in the dark. Also in the cast are Ben Shields as Stephen, Mark Gadbois as Anthony, Steve Voldseth as Reverend John, and Chauntae Pink as a television reporter.

Co-directed by Terry Jastrow and Michelle Danner, this material, supported by an effective set design by Chris Stone and light design by Juliet Klanchar, is on a slippery slope. In less skilled hands, it could have been one long lecture as there were lots of statics and anti-war hyperbole in Fonda’s long speeches. Instead, due in large part to the excellent production, it is a compelling, thought-provoking evening of theatre.