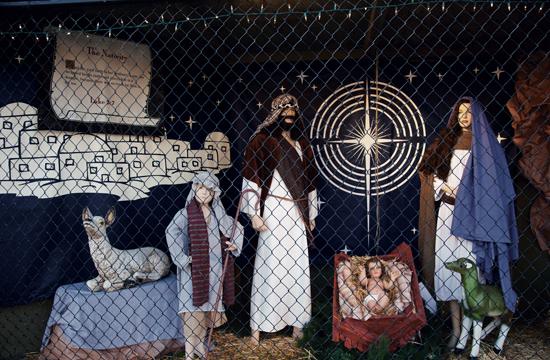 With Christmas on Sunday, many families across Santa Monica will spend the weekend honoring old traditions, starting new ones, reuniting with loved ones, or just using the spare time to catch up on some rest.

There is one small segment of town where certain people have not been able to honor old traditions to the fullest, causing a group of churches to alter the way they collectively pay homage to Christianity’s most holy of days.

At Santa Monica’s Palisades Park, the group known as Santa Monica Nativity Scenes (SMNS) has publicly and proudly told the story of the birth of Jesus Christ via a large nativity scene along Ocean Avenue in Palisades Park.

The large nativity scene display has occupied 14 designated plots of Palisades Park for almost 60 years. This year, that display has been significantly whittled down due to a sudden spike in competition as the alliance of churches became just one of more than a dozen groups applying to use the 21 available plots for holiday- or seasonably-themed displays at Palisades Park.

Previously, SMNS, which is a coalition of local churches and groups, was one of only three applicants requesting use of 16 of the 21 allocated spaces. However, this year, with City Hall reporting 13 applicants seeking permission to all 21 plots for its respective displays, land suddenly became scarce (a group may request up to nine plots).

Due to the increase in demand and because City Hall must consider all applicants per the First Amendment, a lottery system was employed to award he plots. SMNS was granted just three plots, down from its usual 14.

In response, SMNS started a “Save Our Nativity Scenes” petition, in hope the group could again erect 14 unique nativity scene displays as had in years past.

“We are asking the city give the nativity scenes the preference not on the basis of its content but because it is a historical event and is supported by a local group in a local park,” Jameson said. “People have been very gracious. We have received several hundred signers on our petition.”

The petition has been both online and on paper.

The SMNS website further elaborated on the group’s position on the matter, believing “a small group of out-of-town atheists schemed to monopolize display space” and that the Save Our Nativity Scenes petition could help the group retain “this time-honored local tradition in a local park in 2012.”

While the group believes the surge in plot requests is attributable to individuals and groups outside of Santa Monica, city officials cannot discriminate against the applicants.

Palisades Park is considered a public space where, under a First Amendment application, City Hall is handcuffed as to the level of regulation it may impose on those who wish to use the area. The Supreme Court has ruled governments of any level are restricted from prohibiting communication or expression unless there is some sort of content-neutral justification.

One public entity attorney said City Hall might not prohibit a group from seeking to use any number of 21 plots merely based on a group’s location or religious affiliation (or lack thereof).

“This concerns both public space and religion, so the First Amendment is definitely at play,” attorney Szu Pei Lu told The Mirror. “It’s not as simple as allowing one group to be selected over another based upon geography or its mission.”

Lu also added that a group’s established presence in a public forum for any length of time is also not a legal standard in selecting which organization is entitled to continued use of that space.

In addition to SMNS, one plot was assigned to a Jewish group, while the remaining spaces were granted to a pair of individuals to share “solstice” wishes with passersby.