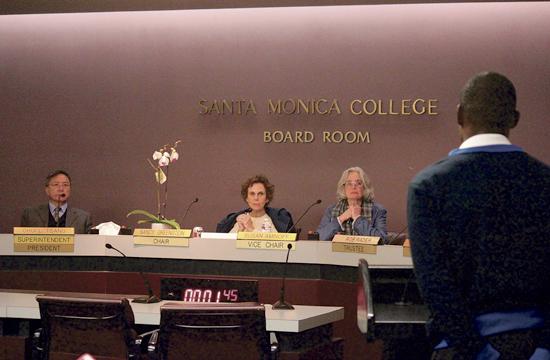 Santa Monica College students and faculty members appeared before administrators at the College’s Board of Trustees meeting Tuesday to speak out about the cancellation of winter athletic and kinesiology classes and urge compensation be paid to part-time coaches for the extra hours required beyond their minimal 15-hour stipends.

Fourteen student athletes and faculty contributed to the public comment portion of the meeting, questioning why the athletic and kinesiology departments were the only departments excluded from the newly reinstated winter session.

“Some things have to be cut out and the priority is not the P.E courses, and that’s the part being affected,” Tsang said. “The college has made a policy and decision based on priority and that is the decision of the state that is also advocated by the Chancellor’s office. And that is why we should fund the core economic area and P.E is not part of those curricular areas. That’s why we are not offering those classes. There are also a lot of courses, not just those courses that we downsized a great deal. And we are lucky to have 250 sections.”

For student athletes, this means they are put at a two-week competitive disadvantage compared to other schools in the conference that began training at the beginning of the winter session on Jan. 2.

These physical education classes are offered to prepare student athletes with training to compete in spring intercollegiate sports such as track, volleyball, softball, swimming, tennis, and water polo.

Santa Monica College freshman Bradley Rava of the men’s swimming team spoke before the board.

“When I was choosing a place to go to college I was looking for a place where I could train with the best coaches around,” Rava said. “I am already put at a severe disadvantage to transfer. What ended up happening, in the two weeks that we missed, I had to drive around the city and spend money to join programs. Swimming to me is just like any other class here and it’s what’s going to put me in another college and when you take that away from me, you are taking away one of my biggest assets to transferring to the best school possible. I think that it’s very unfair that I’m put at such a disadvantage compared to my competition.”

Santa Monica College has a reputation for having the number one transfer rate in California. Students are attracted to the school for its academics, transfer rate, and also for the quality and reputation of athletic department coaching staff.

For the 17 intercollegiate sports that compete at Santa Monica College, the coaching staff consists of three full-time coaches and nine part-time coaches.

According to the administration, part-time coaches were given a stipend and additional money to coach for 15 hours outside of the semester.

Women’s tennis coach Richard Goldenson spoke at the Board of Trustees meeting about the compensation that the coaches would receive and not having a winter session for training.

“I am speaking to you today on the fear of retaliation of being fired,” Goldenson said. “I am not protected I’m a part-time coach. I’ve been told that I would only be paid for 15 hours of work during the winter intersession. This winter marks the first time in 10 years that I have not received a winter teaching assignment which I have always used to prepare the team for intercollegiate competition.”

The start of the official training season at Santa Monica College for spring athletes and coaches began on Jan. 15.

According to the coaches, to properly prepare a team they are going to have to put an in extra 45-55 hours and work with out pay after their 15 hours of paid work.

Intercollegiate sports such as women’s softball and tennis will have games scheduled during the winter session that can add more time for training and travel.

Swimming and diving head coach Steve Contarsy spoke about the coaches stipends and why the athletics departments was not given a priority.

“Unfortunately, Santa Monica College has some of the lowest stipends in Southern California,” Contarsy said. “You’re taking a stipend that is inadequate and you are asking the coaches to do more work. Then you are offer no winter classes which would be a way to supplement income for part-time coaches. Taking the stipend and stretching it over a longer period of time and now they are asking you to prepare your teams. Now they are being grossly unreasonable.”

Contarsy hopes that the administration will figure out way to compensate the coaches for the extra hours that they will be putting in and request to be put on the agenda for the February board of trustees meeting.

“When we asked questions to several of the administrators and even people who are associated with the Board of Trustees,” Contarsy said. “Athletics was being compared to community service or the emeritus. That is scandalous. How do you take current SMC students who are representing Santa Monica College that put on a uniform and who are representing the campus and study body. They should be treated exactly the same way as anybody taking a math, science, and English class.”

Contarsy has trained past Olympians. Last year alone, he sent 20 athletes with four on academic scholarship to major universities such as UCLA, Berkley, USC, LMU, and NYU.

The panel of speakers concluded with a statement from Computer Science Professor Howard Stahl.

Due to the Brown Act, the board was not be able to respond to any of the public comments.

Tsang said the issue would be put on the Board’s next agenda for further discussion.

“It’s abundantly clear in the case of reduces resources we have to make certain priority choices and unfortunately we have gone from 800 sections to 250 sections,” Tsang said. “A lot programs are effected including your program and so are many hundred of sections. We can only guarantee that we will work hard to see if we can get more funding from the state to try to restore the ongoing programs that we have so that you and other students won’t have to suffer the lack of classes that we are facing at this point.”

The next board of trustees meeting will be held at Santa Monica College on Feb. 5 at 6:30 p.m.