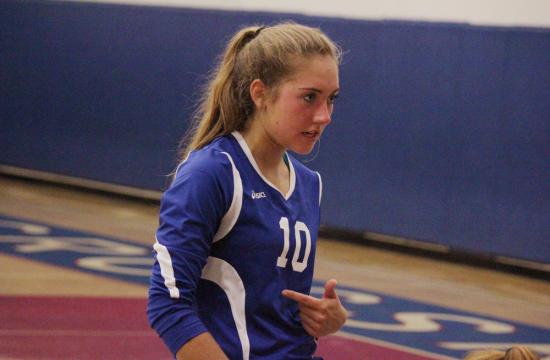 Pacifica Christian blue chip volleyball setter Kiani Lane has committed to Gonzaga University as a recruited walk-on after leading the Seawolves to the CIF Finals in 2013, and come fall she will face new adversaries and challenges from volleyball players in the powerful West Coast Conference.

Lane said that she considered attending many different schools but decided on playing for the Division I Bulldogs in the end.

“I have never been a person who had their heart set on a school, but I never thought I would be able to find a school that fits me as perfectly as Gonzaga,” said Lane. “I actually didn’t commit till very late, on May 30th, the last day seniors have to commit to a school.”

Awards Lane has won in Club Teams and with Pacifica Christian are numerous but include being named the Heritage League MVP in 2011 and the Seawolves team MVP in 2011 and 2012.

Top awards Lane has received in 2012 include being named to the All-Tournament 1st team at the Brentwood School Invitational Tournament 2012 and named MVP of the Milkin Dig Pink Tournament 2012.

With all these awards under her belt, Lane still found it difficult to be recruited.

Lane said that being recruited by colleges can be difficult for high school seniors who are trying to build their portfolio in order to be recognized as an athlete a school would consider to play college ball.

“I was surprised by how stressful it could be at times,” said Lane. “The recruitment process can be brutal and time consuming. There is a lot of filming, picking out clips, sending video, writing e-mails, getting recommendations, and ultimately your fate is in the hands of coaches who have thousands of people to choose from.”

Lane said that the coaching staff at Gonzaga University was the type of coaches she wanted to have as a college athlete.

“My coaches, Coach (Dave) Gantt, Coach (Allen) Allen, and Coach (Diane) Pascua were so gracious and welcoming throughout the whole process and made my decision even easier,” said Lane. “Volleyball has been the one constant in my life and I am exciting to continue playing DI volleyball as a setter at Gonzaga in the fall.”

Gonzaga is part of the prestigious West Coast Conference that plays other division one volleyball teams such as Pepperdine, Loyola Marymount University, the University of San Diego, BYU, and Santa Clara.

Lane looks to be setting for Savannah Blinn–who was named to the 2012 All Conference Freshman Team in 2012- and the other members of the Bulldogs team.

Lane said that she enjoyed the West Coast Conference schedule because she will be able to see her family during the fall.

“It will actually be nice because I will be flying home to SoCal every weekend to play,” said Lane.  “When I committed to Gonzaga I wasn’t just committing to the team but to the school as well. When I visited Gonzaga I loved the people, educational standards, school pride, class sizes and professors, beautiful campus, city, and overall atmosphere. Overall I am very excited to continue playing volleyball and my education at Gonzaga.”

Lane qualified for the Junior Olympics in Volleyball and will be going to Dallas later in June with the date and time TBA.

Lane reports to Gonzaga to play volleyball as a Bulldog on August 9.

A list of awards Lane has received while playing sports can be found below: