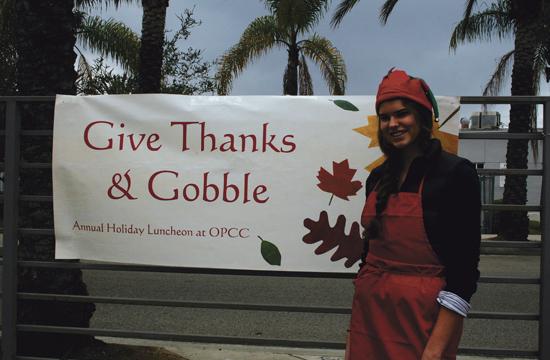 Decked out in Santa hats, 250 clients of the Ocean Park Community Center gathered for a holiday feast put together by more than 40 volunteers last Saturday afternoon. The luncheon was the largest event held at OPCC this year, and one teenage girl organized it all: 17-year-old Skye Montgomery, a senior at Westmark High School.

“Give Thanks & Gobble” was Montgomery’s project for the Girl Scout Gold Award, the equivalent of the Boy Scout Eagle Award, in which a girl scout develops a sustainable project.

Montgomery said planning the event began months ago. She logged at least 70 hours of work.

“She took this on all on her own,” said Lynn Mack-Costello, the Service Unit Manager for Westside Girls Scouts troops. “I’ve known her since she was young. It’s been wonderful to see her come into adulthood and put this together.”

Montgomery was inspired to take action on hunger and homelessness after seeing many homeless people around the city.

“I felt fortunate for my comfortable lifestyle,” Montgomery said. “I wanted everyone to have an enjoyable holidays.”

Montgomery said she wanted to hold the event with OPCC to generate broader awareness for the organization’s work in the community.

OPCC is the safety net for low-income and homeless youth, adults and families, at-risk youth, battered women and their children, and people living with mental illness in Santa Monica and on the Westside of Los Angeles County, according to OPCC Executive Director John Maceri.

McKinley Williams, OPCC’s Development Director, said OPCC has a 92 percent retention rate for clients who enter into permanent supporting housing, while the national average is 60 percent.

As part of her project, Montgomery set a goal to fundraise $50,000 for OPCC by the end of the year. At least $30,000 has already been committed, Williams said.

Montgomery also said she hoped the event would bring the community together.

As part of her fundraising, she contacted local business for donations. The 99¢ Only Stores donated $999 for gift bags with hygiene products while Sports Authority donated socks and beanies.

The event also gathered together volunteers from many parts of the Westside including Montgomery’s family friends, peers from Marymount and Loyola high schools, and many members of St. Matthew’s church.

Montgomery said the event would be held annually, but she planned to move the date closer to Thanksgiving.

While she intends to organize it for a few more years, Montgomery said she hoped other young people would take responsibility for “Give Thanks and Gobble” in the future.

“It will always be at OPCC,” she said. “Unless a bigger venue is required.”

Christine, who withheld her last name to maintain her privacy, first experienced homelessness at age five.

She said she was proud of Montgomery for creating the event.

“It’s nice to see young girls do something for the community,” Christine said. “Maybe she can change her generation.”