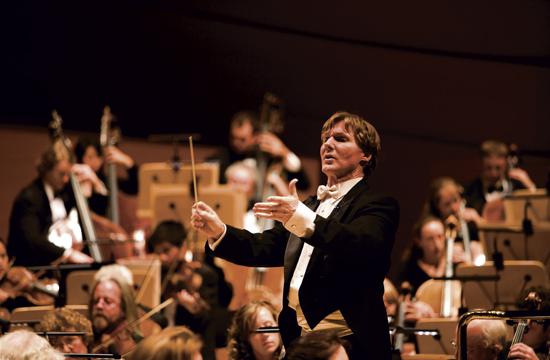 The Santa Monica Symphony has suddenly come back to life just months after its association announced it was effectively closing its doors for the coming year.

After some innovative thinking and restructuring, three concerts have been announced for Nov. 11 and Jan. 20 and May 25 next year after its board appointed Guido Lamell as its new conductor and music director on Oct. 8.

Lamell is a violinist with the Los Angeles Philharmonic who has been performing with them in Los Angeles and around the world for the past 33 years.

Lamell said his love of music goes beyond the violin as he has conducted the Topanga Philharmonic for 23 years.

“I’ve studied conducting from the beginning, first at the University of Michigan and then in seminars and classes everywhere,” Lamell said. “But the greatest conducting school of all is playing under the world’s finest conductors in the LA Philharmonic.”

“I thought about all the years when I would spend hundreds of hours recruiting musicians, organizing sheet music, borrowing equipment, finding support, designing T-shirts, and calling newspapers,” Lamell said. “And here for the first time I was being asked to walk on stage and conduct this fine orchestra with a history of almost 70 years. I would just raise my baton and there would be… music!”

He said he had to pick up his jaw and phone from the floor and responded, “Yes, I’d be honored.”

“I learned that there had been a break-up between the former music director and the Santa Monica Symphony Association,” he said. “The Symphony found itself in a state of financial distress and without a music director. So the Symphony Board voted to cancel all of their planned concerts for the 2012-2013 season.

“Considering the season cancellation, I asked, ‘How many musicians do we have?” he said. “I remember being shocked by the answer: ‘Eight!’ came the reply. The floor and phone had a reunion. Then again, I thought to myself, it’s a lot more than I usually start with. Paul continued, ‘That’s why we’ve asked you to come on board. The musicians know you. They’ve played in your concerts before and they know that you’re really good at building orchestras. We need you to rebuild and revitalize the Santa Monica Symphony.’”

Today, two months later, after countless hours on the phone and more emails and less sleep than ever before, Lamell said he has recruited players, who have recruited others players, which has built up the Santa Monica Symphony to about 60 fine musicians.

Lamell said this included musicians who have returned after leaving the orchestra years earlier for various reasons.

The reinstated season, which are all free concerts open to the public, begins next Sunday, Nov. 11 at 7:30 p.m. in Barnum Hall on the Santa Monica High School campus. The program includes the Egmont Overture by Beethoven, variations on a theme by Haydn by Brahms, and Scheherazade by Rimsky-Korsakov.

As an introduction, there will be a pre-concert talk given at 6:30 p.m. by Russell Steinberg, Ph.D.

Attendees are encouraged to visit smsymphony.org for complete details, parking information, and for information about the other concerts scheduled in 2013.

Lamell encouraged anyone who is a strong player who would like to join next week’s concert, or any future concerts, to make contact though the website.

“Although we are not yet up the full strength I seek, we’ll get there soon,” he said.

“Even after all this, it’s still a fulfillment of my dreams. I’ve been a Santa Monica resident and music teacher for 24 years. This is my home; it’s where I’ve raised my family. I’ve attended many of the concerts of the Santa Monica Symphony and always hoped that someday I’d get a chance to conduct these fine musicians and give flight to my own musical ideas. Some of my own former students are now in the orchestra. What could be more gratifying than that?”