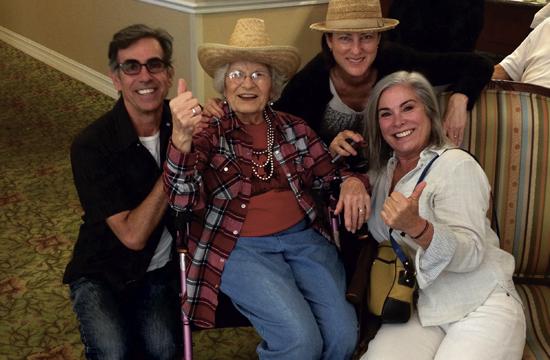 In a world where social media dominates, the idea of hand-writing a letter may seem obsolete. For 91-year-old Sadie Fanali, however, the age of video chatting, email, and instant messaging has not stopped her from exchanging letters with her pen pal of 80 years, Lorraine Thomas.

Sadie and Lorraine have been exchanging letters since 1932, but have never met in person until last weekend.

Sadie, who lives at The Gardens of Santa Monica on 2nd Street, was given the opportunity to meet Lorraine through a gift from Jeremy Bloom’s Wish of a Lifetime Foundation.

Bloom’s Wish of a Lifetime Foundation seeks to foster respect and appreciation for seniors by granting life-enriching wishes.

In 2008, Bloom launched the organization with a vision to initiate a cultural change by granting the wish of a lifetime to deserving seniors throughout the United States.

After applying to the foundation on a whim, Sadie was shocked to learn that her life’s wish would finally come true.

Sadie was only 11 when her pen pal relationship with Lorraine first began.

She discovered Lorraine through her brother’s comic books. She realized that on the back of the comic book was a list of children’s names seeking pen pals.

Curious to write to someone, Sadie chose a girl named Annie Lum.

Sadie was attracted to the fact that Lum was from Hawaii, a place Sadie thought to be exotic.

Annie answered Sadie’s letter, but thought Sadie would be best served writing to her 11-year-old sister, Lorraine, instead.

Annie was right indeed, as Sadie and Lorraine have not stopped writing since that fateful day in 1932.

Sadie believes her relationship with Lorraine has not suffered, despite never having met in person.

“I know her like a very close friend,” Sadie said. “She always ends her letters saying you are my best friend and I love you.”

Sadie said “life’s little obstacles” have gotten in the way of the two not being able to meet in person.

Having nine children 5,000 miles away from Lorraine made it difficult for a face-to-face meeting to take place.

There was also a financial concern that prevented a meeting, as both women were working class wives and mothers on tight budgets.

Even though Sadie had never seen Lorraine in person until last weekend, Sadie’s brothers connected with her during WWII.

Sadie told her brothers in the service to make sure to visit Lorraine in Hawaii if either of them found themselves in Oahu.

Sure enough, two of Sadie’s brothers were able to meet Lorraine and report back to their sister.

“When my brothers met her it was like a connection was created with everyone,” Sadie said.

Before Sadie was granted her “wish of a lifetime,” she assumed a meeting with Lorraine would not happen.

Being perfectly aware of the improbability of ever seeing Lorraine did not hinder her relationship.

Sadie took comfort in the fact that although she may not meet her friend in this world, perhaps their reunion would still happen some other way.

“I didn’t know if I would ever see her, but I thought maybe I would see her in heaven,” Sadie said.

Sadie and Lorraine saw each other in person for the first time on June 14.

Although this meeting may seem like the end to a long standing relationship based solely on letters, the friends will still continue to write to one another.

In an age where writing a letter seems so very rare, Sadie has proven that a friendship based on the written word works exceeding well.

To learn more about the Wish of a Lifetime Foundation, visit seniorwish.org.