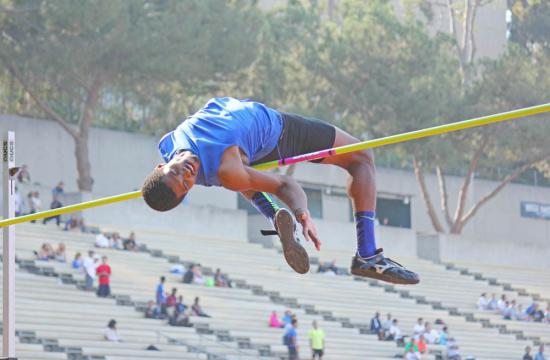 The annual Jim Bush Meet at UCLA brought together Track and Field  athletes from around the world pitting some of the worlds best athletes in a friendly yet intense competition at the University of California Los Angeles Saturday afternoon.

Santa Monica College cross country coach and meet supervisor Eric Barron said that the Jim Bush meet is a good opportunity for athletes from around the world to come together and compete in the various Track and Field events.

“I like the meet because it has everything from gold medal Olympians to serious recreational runners,” said Barron.  “Everybody is in their heats separated by times so they are placed in the appropriate heats.  So they are running against people they should be competing with.”

Ross said that he was having a good day at the Jim Bush meet and this allowed him to match his personal best jump of 2.28 meters.

“I cleared that one on my first attempt so I was feeling pretty good and they moved it up to seven seven,” said Ross.  “I had one or two good shots at it but that height will probably come later.”

Blind runner David Brown won his heat scoring a 22.74 in the Men’s 200 meter dash under the guidance of sprinter Roland Slade.

2012 Olympian and Santa Monica Track Club representative Prince Mumba said that he thought the race went well for the SMTC members who participated in the Jim Bush Meet.

“Overall I am excited as our race set a big standard,” said Mumba after the race. “I was happy to place second next to my teammate Felix Katua.”

Mumba, who originally hails and represented Zambia in the London 2012 Olympics, participated in the Jim Bush meet along with all members representing the Santa Monica Track Club.

The SMTC sprinters train in Santa Monica under the guidance of legendary track and field coach Joe Douglas who has coached a long line of successful Olympic athletes including Carl Lewis.

Recently, the Santa Monica Track Club participated in the Oxy High Performance meet and Kitur placed first in the 800 meters wit a time of 1:44.85 on May 17 at Occidental College.

Kitur is now ranked eighth in the world based upon his time.

Other runners with notable times include blind runner David Brown who won his heat scoring a 22.74 in the Men’s 200 meter dash under the guidance of sprinter Roland Slade, and Ahmad Rashad who ran a 10.29 in the 100 yard dash.