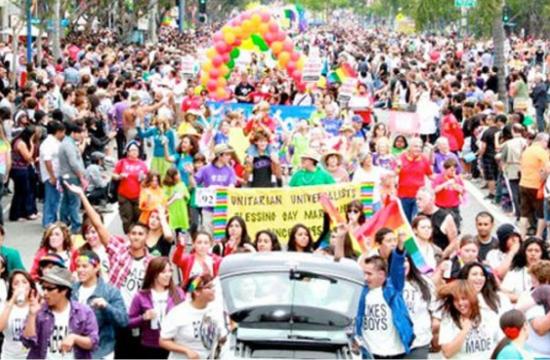 Getting around parts of West Hollywood will be a little more difficult beginning tonight as street closures begin in advance of this weekend’s 2016 LA Pride Celebration, which will include musical acts, a festival and parade.

The event is hosted by the city of West Hollywood and Christopher Street West.

To accommodate the event, West Hollywood Park and the West Hollywood Pool have been closed since Monday. The park will remain closed until 6 p.m. Wednesday, while the pool won’t reopen until 8 a.m. June 20. The West Hollywood Library will close at 7 p.m. tonight and will reopen at 11 a.m. Monday.

The following street restrictions will be in place:

— San Vicente Boulevard will be closed between Santa Monica Boulevard and Melrose Avenue from 7 p.m. tonight through 10 a.m. Monday;

— Santa Monica Boulevard will be closed between Doheny Drive and La Cienega Boulevard from 7 to 8 p.m. Friday;

— Santa Monica Boulevard will be closed from Fairfax Avenue to Doheny Drive from 5 a.m. to 5 p.m. Sunday;

— Streets one block north and south of Santa Monica Boulevard will be closed from Fairfax Avenue to La Peer Drive from 5 a.m. to 5 p.m. Sunday;

— Crescent Heights Boulevard will be closed from Romaine Street to Fountain Avenue from 5 a.m. to 5 p.m. Sunday; and

— Norton Avenue will be closed between Havenhurst Drive and Laurel Avenue from 5 a.m. to 5 p.m. Sunday.

The city of West Hollywood will suspend enforcement of permit parking restrictions from 4 p.m. Friday to 11:59 a.m. Monday. Metered parking will be enforced on Friday and Saturday but not on Sunday, when the parade will start at 10:45 a.m.

Motorists were warned, however, that parking restrictions will remain in place in neighboring Beverly Hills and Los Angeles.

More information about the festival is available online at www.lapride.org.