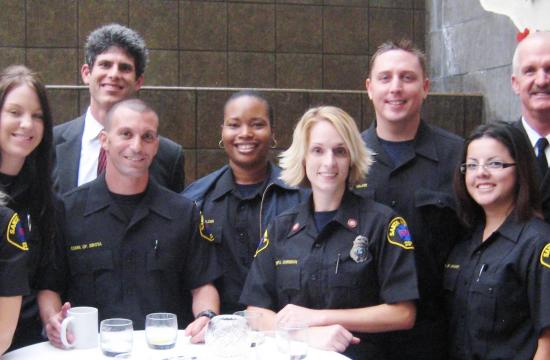 At press time, more than 30 new heroes had confirmed attendance, but representatives from the chamber said they expect as many as 50 to attend. The event is Tuesday, Oct 19, from 4:30 to 6:30 p.m., at Le Merigot – A JW Marriott Beach Hotel & Spa located at 1740 Ocean Avenue in Santa Monica. General admission tickets are $25 for guests or $30 at the door, and $5 for students. They are available through Oct 15 at www.smchamber.com

The beloved Lacy unexpected died May 30 at 56 years-old, after suffering a heart attack while on vacation with wife, Patty. He was a local legend for coaching two Santa Monica high school teams to California Interscholastic Federation football championships, St Monica Catholic in 1998 and twice at Samohi. He stopped coaching in 2003 and served as athletic director to countless of Samohi students.

“He was one of those football coaches that was legendary for those of use who grew up in Santa Monica,” said Principal Tim Kusserow of the Carlthorp School, who was coached by Lacy and as a family friend, will present the Inspirational Hero Award to Lacy’s wife, Patty. “However Lacy is best remembered off the field, as a man of integrity and character – a man you respected – Not what he did on the job, but how he lived his life.

Kusserow said he can’t think of a better way to show Santa Monica’s new heroes that this City cares for people like them than to honor Lacy. “In coming to Santa Monica it is important for these people to recognize a hero that came before them – it is also important to show them that they are entering a community where we value our fallen heroes – where people like them will be remembered and honored.”