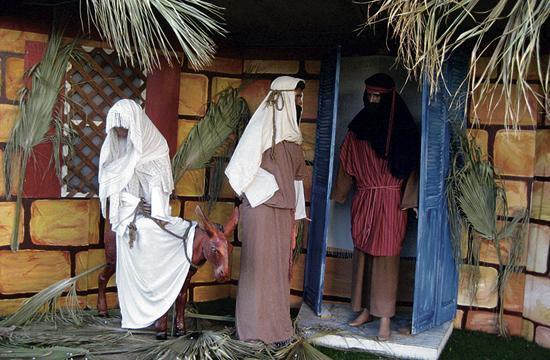 The Santa Monica Nativity Scenes, a community tradition since 1953, will be on display through New Year’s Day at Mount Olive Lutheran Church along Maple Street, one block north of Ocean Park Boulevard west of 14th Street, and also along 14th Street.

“We are deeply grateful to the people of Mount Olive Lutheran Church and Pastor Eric Shafer for providing a place for a second year for Santa Monica’s distinctive Christmas Story to spread the message of love, joy, hope, and peace found in the Christ child’s birth to residents and visitors,” Jameson said.

Although the scenes will be displayed at Mount Olive Lutheran Church, the opening ceremony for this year’s event will be at Palisades Park, home of the Scenes through 2011.

The opening gathering will be at 3 pm Sunday, Dec. 14, along Ocean Boulevard near the foot of Arizona Avenue.

The ceremony will feature recital of the Christmas story and congregational Christmas carol singing accompanied by a Salvation Army brass quartet.

The Nativity Committee also will honor longtime supporters Dr. Lawrence and Kari Czer of Santa Monica during the opening event. Kari Czer has long been a representative of The Lighthouse Church on the Committee and organizes the opening ceremony every year.

She and her husband open their home as site of Committee meetings, and last year commissioned and donated a 24-foot-long banner, “The Christmas Story.”

The nearly five-foot-tall banner is a compact version of the Nativity Scenes, displaying photos of many of the Scenes accompanied by scriptures narrating events surrounding Christ’s birth.

“Kari has been tireless in promoting the Scenes and pursuing every way she could to share the good news of Christ’s birth with the community,” Jameson said. “We are deeply thankful for her and her husband’s efforts.”

The city of Santa Monica in 2012 banned the Nativity Scenes and any overnight displays from Palisades Park.

A U.S. District Court judge dismissed the suit without trial, and the Nativity Scenes appealed. A three-judge panel of the Ninth U.S. Circuit Court of Appeals will hear oral arguments in the appeal on Feb. 6 in Pasadena.

Jameson praised Becker for donating the many hours of legal work he has provided the Committee. Court fees have been paid by the Pacific Justice Institute.

The Committee is welcoming a new member this Christmas, St. Peter & St. Paul Coptic Orthodox Church of Santa Monica, and its pastor, the Rev. Paul Megally.

The church will mount Scene 11 in the Nativity series, “Joseph’s Dream,” in which an angel warns Joseph to flee to Egypt with the baby Jesus to escape the evil Herod.

The Egyptian connection makes the scene particularly fitting for a Coptic Church with its Egyptian heritage, Jameson said.

“We are delighted to have St. Peter & St. Paul Coptic Orthodox Church join us, and we thank Pacific Crossroads Church, which displayed the scene before retiring from the committee this year,” he said.

Donations defray the $18,000 annual cost, which includes assembly, removal and storage of the booths; mailing; advertising; and insurance.

Donations may be sent to the Nativity Scenes Committee at P.O. Box 0648, Santa Monica 90406, or made through the Committee’s website, www.SantaMonicaNativityScenes.org.

By mirrormmg December 6, 2014
in Life and Arts
Related Posts